The End: the best (and worst) words in the English language 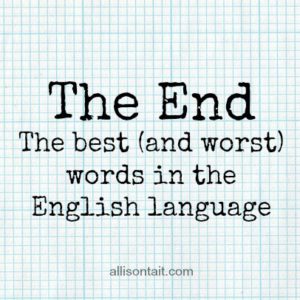 On Saturday, I typed ‘The End’ on the first draft of book three of The Mapmaker Chronicles.

Book one (Race To The End Of The World) is at the printers, almost ready to fly the nest.

Book two (Prisoner of the Black Hawk) arrived back to me this morning in the form of copy edits (they’re on the dining table, I haven’t yet dared to look…).

And book three is… well, as yet untitled, but finished. Sort of. I have put it in a drawer (metaphorically speaking) while I cogitate on the endless list of notes I wrote myself during the writing of the book, and on Monday I will go back to page one and put in all bits and pieces I’ve left out, tweak all the bits and pieces I’ve put in, add 10,000 words, and remove 5,000 words. Because that’s what editing is like for me.

For now, though, I am sitting here feeling bereft and relieved and sad and happy and thrilled and worried and… all the feelings. I have lived with these people in my head for a long time now. I have always known where they were going, but there have been times when I wondered how the heck they were going to get there.

It’s a funny feeling, this ‘finishing’ business, because I’m well aware now that, really, it’s just the beginning. I remember when I wrote the first draft of the first manuscript I ever attempted, I typed ‘The End’ and thought ‘well, that’s that then, I can say I’ve written a book’. Now I type ‘the end’ and my thoughts immediately turn to the next step, which is starting all over again.

Given that I feel like this at this stage – with book one still to come out, book two still to edit, and book three still to rewrite, heaven only knows what state I’ll be come October 2015 when book three hits the shelves and I really have to let them go.

Fortunately, I have several other projects on the go (as always), including edits on an adult novel, some picture books to follow up and … well… maybe, just maybe, an outline for more Mapmakers books. You know. Just in case.

Have you written ‘The End’ on a manuscript? How did you feel?