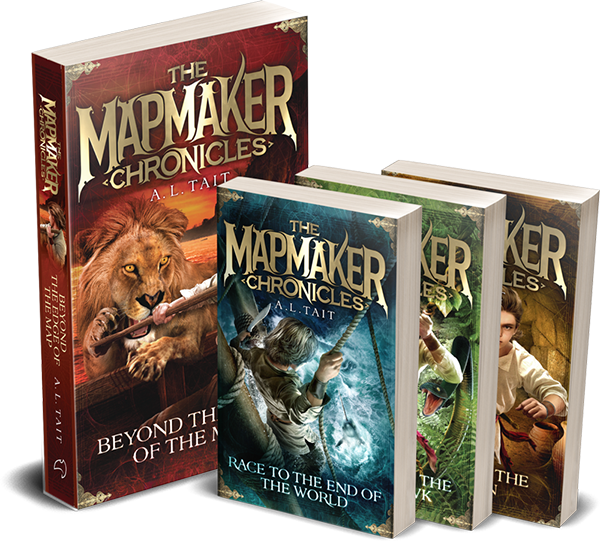 The Mapmaker Chronicles is an exciting adventure series about a race to map the world … and a boy who discovers more than he ever imagined.

“The Mapmaker Chronicles showcases a vivid imagination and gift for storytelling which marries fantasy and reality together to great effect and is bound to be a favourite series on the bookshelf.” – Hillary Smillie, Buzzwords Magazine

“This has been the best fantasy story sequence I have read in the past twelve months or so, and here it comes to a highly satisfactory conclusion … “ – Janet Croft Book Reviews 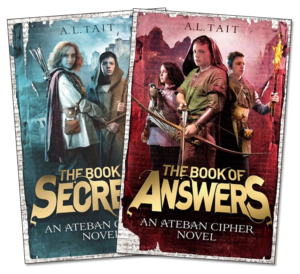 The Ateban Cipher is A.L.Tait’s newest adventure series for kids aged nine and up. Gabe is handed a book by a dying man and must venture outside the Abbey walls for the first time in his life to uncover its secrets – and to keep it safe.

“This exciting fantasy novel aimed at the 9 to 12 age group will satisfy readers, and leave them wanting more. Its fast-paced plot balances a sensitive thoughtful narrator with his newly‑found‑rescuers-turned-friends so that by the time they all figure out the codes and clues, readers have been entertained and engaged.”
– Trish Buckley, Children’s Books Daily

“With high-action, mystery and the threat of a hanging, The Book Of Secrets is an exciting adventure read and an immersive story. From the cloisters of Oldham Abbey to the castle dungeons, from thick forest to Rothwell Town, readers will feel like they are there.” Sandy Fussell, The Sunday Telegraph

“This [series] is the kind of thrilling adventure that has readers turning the pages as fast as they can devour the story along the way discerning many important themes about trust, loyalty, ingenuity and courage.” – Sue Warren, Just So Stories

This site uses Akismet to reduce spam. Learn how your comment data is processed.