Nice weather for ducks – not for dogs 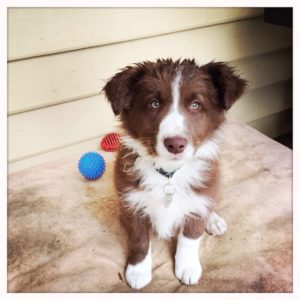 It’s raining, it’s pouring, and the garden is luxuriating in the sheets and sheets of water that are falling from the sky.

Yesterday, we spotted an actual duck standing on our neighbour’s chimney, quacking triumphantly at the clouds. No doubt he was thanking the Duck Gods for sending such nice weather his way.

My new writing assistant is not as thrilled with the precipitation. Having never seen rain before in his 10-week existence, he spends a lot of time lying on his mat, looking morose.

Or out on the muddy grass trying to fight the raindrops that land on his fluff. I don’t want to break his spirit by telling him he’s never going to win that one…

Besides, it’s terribly amusing, and much more interesting to watch him than to actually try to write something.