There’s a mouse in my house: A situation comedy in at least two parts 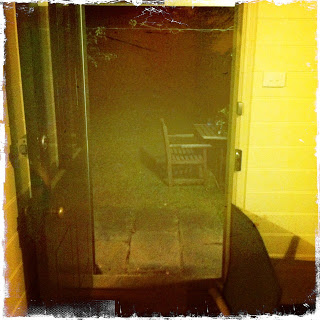 Last night we had a ‘situation’ at our house.

To set the scene, we had discovered that morning a huge pile of mouse poo, some well-chewed almond meal packets and the odd wood shaving (?) in the pantry.

We cleaned it up and made our cunning plans for dealing with said mouse/mice that evening.

Fast forward to that evening and we are sitting in the living room when we hear a thud, and then some rustling and rattling and general carrying-on. I dispatched The Builder to find out what was going on. Long seconds passed. Minutes passed. I roused myself from the sofa to go and make sure the mousie hadn’t carried him off.

He met me in the hallway, a little white-faced. “It ran right past me – actually through my feet – and out the cat door!” he said. I should mention that we don’t have a cat and have been discussing blocking up said cat door since we moved in.

But the mouse was gone. We sat around congratulating ourselves on our superior mouse-scaring skills.

Right up until the point where I was sitting, alone, in my study, in a dark, quiet house, typing. I poked my head out the door. No sign of any mousie. Then again, no sign of The Builder either. Our bedroom door was wide open and he was not tucked up in bed, snoring.

I crept down the hall, pushed the door on the kitchen – and there he was. The Builder I mean. Constructing.

“We’ve got a situation!” he said, slightly wild-eyed, in his Dad pyjamas. “There were two mice and one is still trapped in the pantry.”

When Mousie One had done it’s Alcatraz escape run, we’d simply assumed it had been working alone and wedged the pantry doors closed with a six-pack. We were wrong.

I looked around me. “What exactly have you done here?” I asked.

The back door was wide open and he had constructed a barricade, comprising the cushion from the outdoor sofa, a chair, a toy box and the door mat. This corral was to persuade the mouse to run straight out the back door once he let it out of the pantry.

I could not help myself. I began to laugh. Helplessly. Loudly. Doubled over with hysterics. Hooting and guffawing.

He waited til I finished. Then politely explained that I was being no help. I straightened up and prepared to be supportive.

He crept into the kitchen, climbed on the bench with a broom, and proceeded to fling back the doors. Then he bolted to the door, jumped the barricade and we both stood there, awaiting the mouse’s next move.

Mousie Two’s next move was to stay exactly where it was.

Five minutes later we were all still in position, me still laughing helplessly (albeit silently). He turned to me and politely explained that I was still being no help and I might as well go back to my desk.

Fifteen minutes later, I was considering sending him a text message to make sure the mouse hadn’t eaten him, when he appeared.

He shook his head. The mouse had bolted for the door, but instead of following the carefully constructed path laid out for it, had slipped through the most miniscule of gaps between the toy box and the mat and was now lost in the dining room.

Cue: helpless giggles. Mine, of course.

He had set up a system to keep the pantry door closed, and had closed the dining room door to keep the mouse from joining us in our beds. A tiny trap was laid. We would deal with it in the morning.

This morning we arose to discover that the outside of the dining room door had been gnawed. Clearly Mousie One had returned to help its friend. Meanwhile, Mousie Two had cleverly avoided the tiny trap and had eaten its way through half a packet of Fizzy Lifesavers (seriously, I was surprised it was not laid out on the counter with chronic burping).

I guess this is why they call it ‘situation comedy’.

[image: I wish I had a better shot of the barricade, but this was the best I could do, given my hysterical status.]