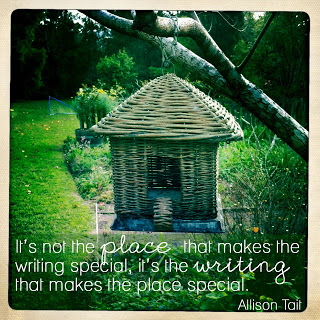 I was watching Grand Designs the other night when, unusually, I found myself shouting at the television. I have been known to shout at the television in the past, but not generally when genteel Kevin is doing his thing. The reason for my vociferous response?

A nice man was building a nice house in France. Part of his reason for creating said house was to install a writing room. Said room was at the top of the house with a wall of windows showcasing a view of rolling French countryside. It would be, he said, the perfect place in which to write His Novel. I remembered a conversation I once had with Australian novelist Allison Rushby about a similar man with a similar dream on that other genteel show Escape To The Country.

“It doesn’t matter what’s out the window,” she said. “You’re either going to write it or you’re not.”

Which is pretty much what I found myself shouting at the television the other night. I then went on to expand on the topic while The Builder watched me, slightly bemused. When I ran out of steam, we resumed polite watching.

At the end of the show, Kevin returned to the house, seven years after it had been built. The man’s writing room was now comfortably furnished with not only his desk, but an exercise bike, some boxes, several piles of newspapers, bookshelves, a keyboard, a pile of bags… oh wait, half of that is what’s in my office. He had written a book. A guide to buying houses in the French countryside.

I am not disparaging the nice man’s dream, nor his efforts. But every time I hear someone say “I’ll write my book when…” it makes me wonder if they’ll ever actually get round to putting the words on paper.

When I dream of my perfect writing life, it involves a little weatherboard studio, open and spacious, with big French doors opening onto a little verandah. There are big, blowsy, old-fashioned David Austin roses involved. The room is always free of clutter, clean, white, fresh. Small boys are conspicuous by their absence.

If I waited until this place materialised, I would never write anything. So I sit in my cluttered (all my own fault, I know) office, in my Fibro, with my family happily rumbling around me. The view is of my struggling vege patch. On hot, still nights, I can hear my neighbour snoring (true story – the first time I heard it, I thought there was a large, dark beast outside my window and was totally freaked out).

Author Fiona Palmer has been sharing pictures of the writing spaces of some fab Australian novelists. I love having a look. Some of them have beautiful views. Others work at the dining table. Some are out in a paddock. Others in offices that would not look out of place in an accountancy practice. For the most part, they involve a desk and a chair and a wall.

What do you think?