Industry Insider: How do you know when a story is ‘finished’? 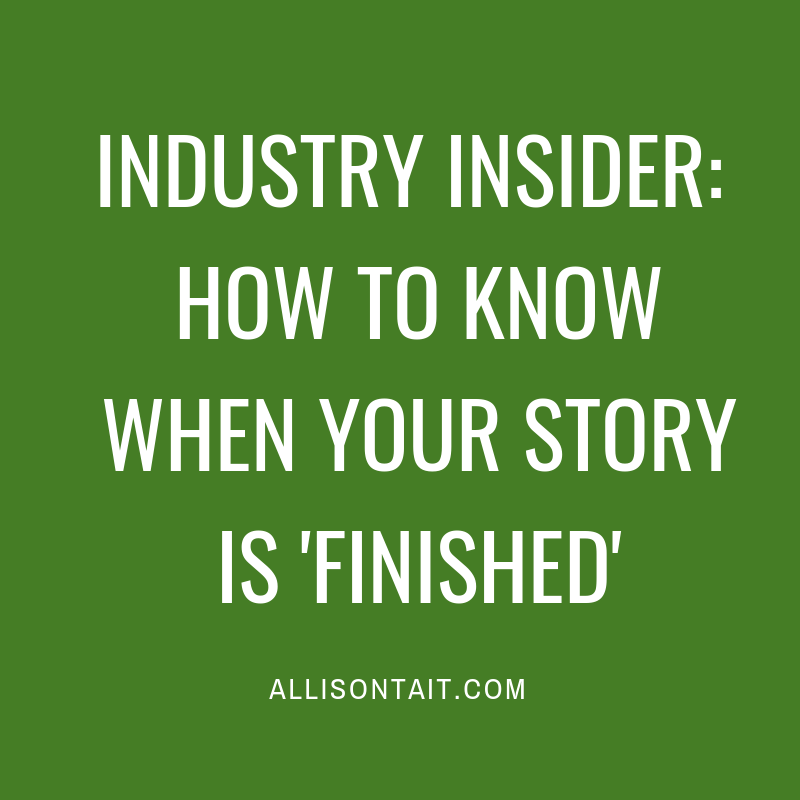 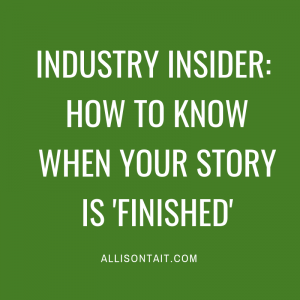 One of the most interesting aspects of any author workshop is the Q&A section at the end. You might remember this post, wherein I advised authors to be prepared for ‘anything’ when it comes to this particular aspect of a talk. But I confess I was caught short during my recent visit to the Burdekin Readers’ & Writers’ Festival.

In my defence, it was the end of a very long, hot Friday, in a (mostly) year 9 workshop, when a year 11 student put up his hand and asked me this question:

How do you know when a story is finished?

I was focused on structure, so I blathered on about getting to The End, about three acts, about reading a lot of books so that you have an innate sense of story structure.

And then I thought about it all weekend. Because, of course, he wasn’t asking me about how to get to The End of a story, he was asking me how you know it’s time to Let Go of a story.

Which is a really, really good question.

Such a good question, in fact, that I decided to get some help to answer it. So I asked a few author mates for their perspective and they all gasped in horror – because the answer is at once simple and complicated.

But then they – in all their award-winning, bestselling glory – gave me their answers, which you’ll find below. They write across a whole range of genres, demographics, and styles. They write novels, novellas, short stories, and essays. Some have 30+ books to their names. In short, they know their way around a story.

“It’s never finished! I had to re-read The Paris Seamstress for the eleventy-billionth time to proofread it for the US market after it had been published here in Australia and I made changes to it yet again! So I prefer to think of a manuscript as “as good as I can make it at the time” rather than finished. Finished is obviously much shorter and punchier to say though!

So the moment when I submit a manuscript is when it really is as good as I can make it right then. I’ll always leave a manuscript to sit for at least a couple of weeks before I send it anywhere, have another look at it and then, if I’m just tinkering rather than really editing or redrafting, it’s reached the stage when it’s ready to go.

For interest’s sake, I did 13 drafts of my very first novel before it was accepted for publication; I now do around 5 or 6 drafts. I know they’re not perfect – that even the published book isn’t perfect – but it’s my best work at that moment.

Which is a good test – can you say, hand on heart, that you’ve done everything possible and given it your all and made it your best possible work? If so, then it’s ‘finished” – for now!”

“You know you’ve finished the plot when the reader can guess the rest. You know you’ve finished the first draft when you can’t think of any other things to change, and you can’t stand the thought of looking at it again. But you’ll have to read it at least four more times to implemented everyone else’s suggestions – that’s when the book is finished.

“I find that if I can read a hard copy without scribbling notes on the page, then that’s it.”

“I know it’s finished when the characters/plots etc don’t bug me when I’m waiting in line, or at the traffic lights – if my mind is disengaged and the book doesn’t appear in it, it’s probably done.”

“I know I am about to be finished when a new book starts to knock on my brain. I get the urge to move on because the new book feels so much more interesting. I start to read and collect material that relate to the next book. This is how I know I am about to finish a project. Pretty soon after this I can put the final sentence in, read over the book and just feel the urge to submit it. Moving on is a sure sign it is done.”

“I know it’s finished when I’ve had it read by a couple of people I trust and addressed their concerns, and it subsequently doesn’t keep knocking on my brain for more. I never trust that feeling unless others have read it, too.”

“When it comes to judging my own work on this score, I am almost always wrong when I initially decide a story is done. Everything I write needs to be composted for at least three months, enough time for glaring errors of style and judgement to become visible to my own eyes. Sometimes longer.”

“I don’t show my work to anyone for an opinion, I judge it myself. And I like to meet my deadlines, so I normally submit on the day or a few days later. Occasionally, well in advance, I might ask for an extra month, in which case I treat that as a firm deadline.”

“For me a piece is never really finished. You can always do better. But I do recognise when I’ve done the best I can for the time being. I stop and send it to my trusted editor, who then pushes me beyond whatever barriers I might have. Ultimately though I know when a story is ready to go into the world, flawed or not. It’s a gut feeling.”

“I know it’s finished when I feel like I’ve brought together the loose ends and untangled the mysteries – the last line really needs to give me a feeling of ‘ahh, it’s done’ (either that or I’m crying tears of joy for my characters).” 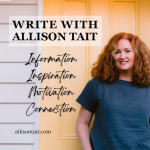 I hope you found this helpful! Are you new here? Welcome to my blog! You can find out more about me here.

For more brilliant writing advice and tips from top authors and other industry insiders, join my online writing community Write With Allison Tait. Click here for all the details.