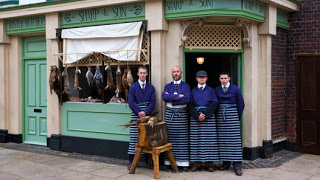 Recently, the ABC ran a series called Turn Back Time: The High Street, to which The Builder and I, in our fuddy duddy way, took a shine. The basic premise was that a group of modern-day shopkeepers moved into the High Street (main street for we Australian types) of a rather dour town in Somerset called Shepton Mallet (seriously, worth watching just for that, don’t you think?). Once a thriving centre of hustle, bustle and industry, the SM High Street in 2010 was a cold, empty, boarded up and very unenthusiastic kind of place.

Each week, the shopkeepers were installed in a different era of the SM High Street, beginning with the 1870s and ending in the 1970s. The aim was to show the highs and lows of shopping over six different eras. To show exactly how and when personalised service was replaced by convenience. Exactly why the diversity of little shops and friendly shopkeepers were driven out of our main streets (because we suffer the same malady on the other side of the world) by homogenous brands.

We all complain about the two-horse race that is Woolworths and Coles but, as The High Street pointed out, it all comes down to our choices. We help to create the very situations that frustrate us.

One of the video stores in Fibrotown closed suddenly this week. The boys were devastated. It was our supplier of choice for Teenage Mutant Ninja Turtles DVDs. It also had a good foreign film section. I confess, though, that for everything else we tended to go to one of the others. Why? It was cheaper.

I know that in the scheme of things the humble ‘video’ store is living on borrowed time. One of our other stores is a Red Room, with it’s automated doo-dads and it’s tiny store space. No displays. No browsing. The Builder and I don’t go there. Why? We never know what we want to see. We know we’ve missed 150 great films in our early child-rearing years, but do you think we can think of a single one of them on the way to the shop? No way. Red Room, and online DVD purveyors for that matter, seem to require that you know what you’re looking for.

Where am I going with this? Choice. We made our choices and now we’re left with fewer choices. Just as The High Street demonstrated has happened over and over again in the last 150 years of retailing. It’s something that the dairy farmers of the South Coast would like us to remember as we pay for our cheap ‘homebrand’ milks at the supermarket. When the choice is gone, we have to take what we can get.

And, as many a regional town, with empty shops and dying populations can attest, what we get isn’t always what we want.