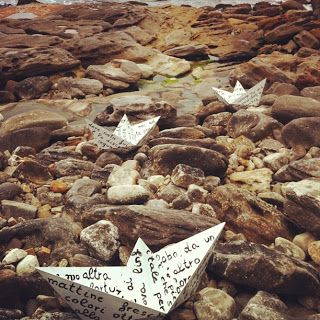 Every once in a while you have one of those weekends that just covers off everything at once. They rattle along at breakneck speed and, before you know it, they’re over, leaving just those tantalising memories behind.

On Friday afternoon I travelled to the Big Smoke with my Dad. Due to trackwork (I’m pretty sure those tracks have been rebuilt seven times since our move to Fibrotown), we spent many, many hours together, on bus and train. Hanging out. Eating biscuits. Talking about nothing. If you have to be squashed into a bus seat with someone, make it someone you really love.

After a visit to my accountant (best glossed over) and a quick beer with my brother TICH in his new abode (note to self, buy funky apartment in hip suburb so that I can pretend to be cool just once in my life), I met up with a writer friend. We spent many, many hours together. Hanging out. Eating burgers. Talking about nothing.

Then I went to stay with my dear friend A, who thinks nothing of evicting her children from their beds so that I can sleep in one said bed, surrounded by little boy detritus, at late notice and at the drop of a hat. If you’re going to arrive late on the doorstep of a friend’s house after several (thousand) beers, make it someone you really love (and who will still love you back).

On Saturday morning, I presented at the NSW Writers Centre on time and surprisingly fresh for my panel at the Emerging Writers Festival. It was a lively discussion and my fellow panelists Alice Grundy and Chris Summers did a stellar job – the upshot of our discussion (Why Pre-Publication Matters) is to be prepared to work just as hard (if not harder) after you receive a publishing contract as you did while writing your novel (or in Chris’s case, play).

One thing I love about writers’ festivals is the people that you meet there. Like the guy who told me candidly over a break that he’d taken another writer, his friend, out the back of his property and shot live ammunition at him just so that he (the friend) could feel what it was like to be under sniper fire.

The same guy showed me the most beautiful writers’ notebook that I’d ever seen. Tiny, copperplate  handwriting, all colour-coded and illustrated. It was a work of art. (Note to self, create lovely writers’ notebook…) I am hoping that he will find me on Twitter so that we can chat some more. I really want to read his book when it comes out. If it is as beautiful as his notebook, it will be a work of art.

After the working part of the day was over, I met my boys in the city and we went to Sculptures By The Sea. The sculpture in the picture was my favourite. Words adrift, words washed up. Also, I am obsessed with paper boats. What’s not to love?

Today was a day of rest. Mostly poking about at home, getting the chores done, shouting at the children. I wrote some words on my NaNoWriMo project and I end the day completely satisfied.

See what I mean. Everything covered.

How was your weekend?