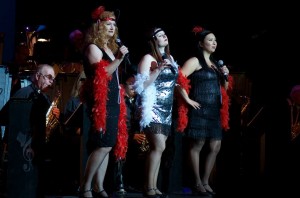 After a huge weekend, it’s all over. Two shows, millions of nerves, and we’re done. When I walked on stage for the technical rehearsal on Saturday, I stared out at all the empty seats. They seemed so … close. By the time the first performance came around later that day, I didn’t even notice them, so far inside my own head was I.

Standing in the wings, someone asked if I was nervous. I explained that it felt like transition phase of labour – you desperately want to go home but there’s a sense of inevitability to it all.

I was vaguely aware of noise out there, people sitting, waiting, expectant. But with all my senses keenly attuned for the opening note, and the opening words of my song going round and round in my brain, the audience disappeared into the background.

I don’t really remember the actual performances. What I remember is the anticipation backstage, reapplying my red lipstick over and over, wondering if I’d actually manage to distinguish myself by falling off the stage this time (my recurring nightmare for the past two weeks).

I met some fabulous people. I got to wear to false eyelashes (attached, with a bucket of glue, by someone with a steadier hand than mine), fishnets and a feather boa. I was introduced to various permutations of the ‘sexy duck face’, now own my own pair of chorus shoes and, frankly, just had so much fun.

And I know that I can sing in front of several hundred people at a time and not crumble into a heap. Which should make merely speaking in front of people an absolute doddle in the future.

Seriously, what’s not to love?

Image courtesy of Dennis Ross (Yes, that’s me in the pic, with my fabulous 1920s nightclub co-singers Lacey and Tam, and the Big Band)