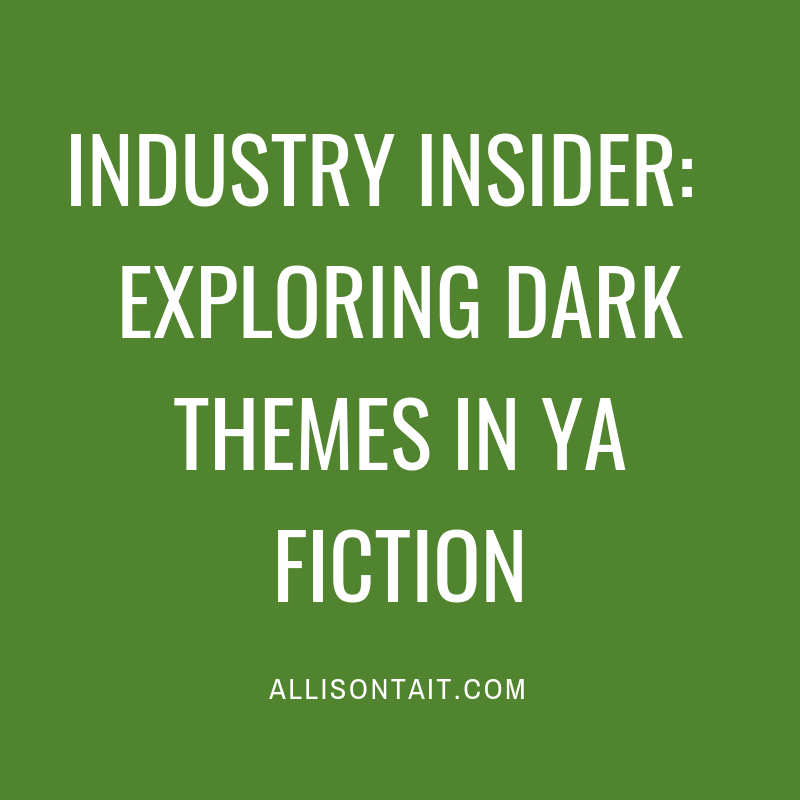 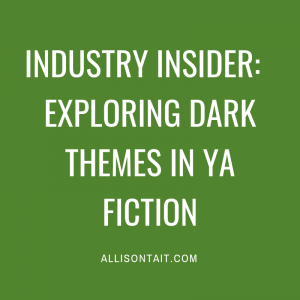 Regular readers of this blog will know that I run an irregular series called Industry Insider, in which professionals offer their insights into some of the big questions about writing, editing, reading and publishing.

This week, Matt Davies, Australian author of debut YA novel This Thing Of Darkness, has popped in to talk about how to manage dark themes in YA fiction. It’s a delicate balance between exploring a difficult theme in a realistic way – and keeping the teen reading.

Here, Matt explains why he believes that challenging books should be part of every teen’s reading life.

Take it away, Matt Davies…

Exploring dark themes in YA fiction

A big part of becoming an adult is discovering that the world can be a really dark place. Bad things happen.

Men kill women who they’re supposed to love, children die at random from terminal diseases, and young people self-harm and take their own lives.

These are harsh realities, and one of the strengths of young adult fiction is that it gives teenagers a way in to these issues in a safe place where they can explore and think about them at arm’s length.

There’s no shortage of difficult themes in modern-day YA. In fact, unashamedly feel-good new releases are in short supply.

Mental illness is being explored more and more (It’s Kind of a Funny Story, Ned Vizzini; Darius the Great Is Not Okay, Adib Khorram), and trauma, particularly the death of a loved one (The Protected, Claire Zorn; Words in Deep Blue, Cath Crowley), is well covered.

Stories about psychological disorders (Everything Everything, Nicola Yoon; Highly Illogical Behaviour, John Corey Whaley) and psychological trauma (The Perks of Being a Wallflower, Stephen Chbosky) are relatively easy to find.

But many of these stories deal with situations that are out of the protagonist’s control or, to look at it another way, not their fault. They delve into plotlines that the characters have been forced into in some way, and the books end up focusing on how the characters learn to deal with their newfound reality.

But what about books that explore dark situations of the character’s own making? Books that ask us to empathise with someone who has done something incomprehensible? There’s not so many of those.

Chris Lynch writes a lot about boys behaving badly. His 2005 YA novel Inexcusable is told from the perspective of a twelfth-grader called Keir. Keir is a loyal friend and a devoted son and brother. He sees himself as a good guy. He loves his girlfriend and would never hurt her.

But then she accuses him of rape.

As the reader, we can clearly see that the image Keir has of himself is skewed. He lives with his lonely, widowed dad, who treats him more like a mate than a son. His dad is an enabler and part of the reason why Keir constantly justifies his own bad behaviour. His family wouldn’t love and support him if he was a monster, right?

It’s a provocative book that raises important issues about intent, responsibility and consent. Ultimately, though, it’s about the lies we tell ourselves and owning up to the choices we make. All choices have consequences – that’s a very adult concept but one that can’t be dodged.

Gail Giles’ Right Behind You (2007) is another YA novel that tackles a tough moral issue for teens. It tells the story of Kip, a 14-year-old boy living with an agonising secret – when he was nine, he set a kid on fire in a jealous rage and the kid died.

Now Kip is starting high school with a new identity after spending four years in juvenile detention. Just as he begins to form friendships, he makes a huge mistake – he talks about his past. The town turns on him and we get the sense that Kip’s life is destined to be a revolving door of secrecy and guilt.

What makes this story so thought-provoking is that Kip is not a psychopath or a faceless serial killer that society can lock up and write off. He’s a kid. In fact, he’s a likeable kid, with a good sense of humour and a huge capacity for love. But he did a horrible thing, and now he has to live with the consequences.

Right Behind You is a powerful story about rage and redemption, guilt and forgiveness. It’s about owning up to your actions and then learning how to move forward.

The idea that there are certain issues that teens can’t handle in their fiction is ridiculous. There’s no restriction on what they can access online or in films or in books marketed at adults. In fact, YA fiction is the perfect place to explore darker themes in a considered way.

My YA novel, This Thing of Darkness, takes on a similar subject to Right Behind You. Dean is 18 and living with a secret past involving years in a youth justice facility for committing a violent crime. Now he’s out and hiding who he really is and what he did. But he soon learns that he will never truly escape his past. He can only learn to live with it, even if those around him can’t.

I work as a freelance editor, and in 2017 I edited a government report into the state of Victoria’s youth justice system. It was dire – harsher than the adult system and not enough focus on rehabilitation. This Thing of Darkness encourages readers to consider the story behind the story.

What drives a child to commit an aggravated crime? What can we do to help them before they do, while they’re incarcerated and after they get out? Without support, in too many cases the cycle of crime continues. And that’s bad for everyone.

Books that ask us to sympathise with teen rapists and child killers are not easy reads. But YA shouldn’t be easy. It should be challenging and it should spark conversations. It should provoke.

Some novels empower; others enlighten. Some do both. I love a great story that follows the hero’s journey – one that sees the protagonist achieve a massive victory against their nemesis at the end.

But the reality is that sometimes we will never be able to achieve the victory we envisage. So we have to settle for a different kind of victory – a lesser one, but something we can accept – and then carry on.

And that’s all part of growing up. 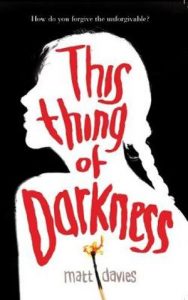 Matt Davies’s novel, This Thing of Darkness, was published by Scholastic Australia in November 2018. The manuscript was highly commended in the Victorian Premier’s Literary Awards for an Unpublished Manuscript.Find out more about Matt and his writing on his website or follow him on Twitter.