Industry Insider: To plot or not to plot? 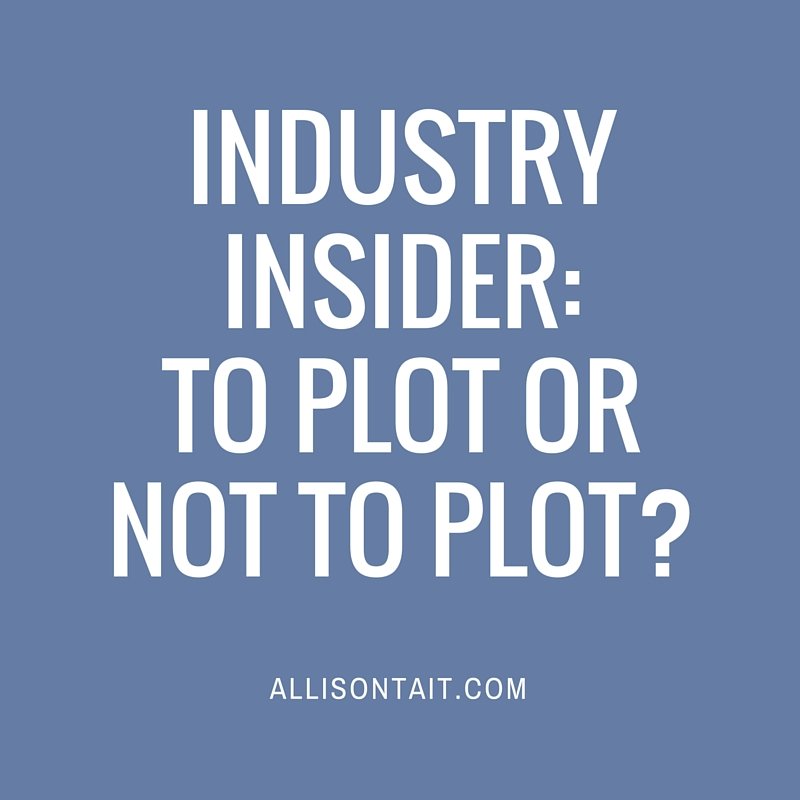 Do you need to plot your novel?

With NaNoWriMo fast approaching, and with this article by Zadie Smith currently doing the social media rounds, it seems that the current hot topic in the writing community is the age-old question: ‘To plot? Or not to plot?’

I thought that I’d add my six cents worth to the conversation by drawing on the archives of the So You Want To Be A Writer podcast to find out what published authors thought about the plotting versus not plotting debate.

Unsurprisingly, I found that each side was well represented… (You can hear the full interviews or read the full transcripts by following the episode links.)

“I’m a plotter. That’s how a book is written quickly and that’s how they come out the right shape, they don’t require much structural feedback, and you can just get on with the line edit and publish the damn thing.

“But I think the problem is these terms, ‘plotter’ and ‘pantser’ (and for those who don’t know pantser means flying by the seat of your pants, making it up as you go along), they’re – it’s a false dichotomy. I don’t think they’re the opposite of each other. I think they exist on opposite ends of the spectrum, and everyone is on that spectrum somewhere. People will say they’re pantsers, but if you say to them, “Do you have any ideas for any key scenes?”, they have –they kind of know where the book’s going.

“Then there are people who are right at the other end of the plotting spectrum who really do … they need to dot point every scene and spreadsheet it and so on.

“I have a general idea of how the story is going to flow from beginning to end, like where the major transition points are, where the beginning becomes the middle, where the middle becomes the end, that kind of thing. And then I divide it up and brainstorm ideas and put them in some kind of order. From that I will brainstorm the beginning with a bunch of scenes, or brainstorm part of the middle, and then I plot maybe two chapters ahead, in quite a lot of detail. And that means that when I sit down to write, I look at my notebook and I go, “OK, well, I’ve got to write a scene where Sam and Violet meet in secret and they go and dance in the empty ballroom while the snow falls.”

“I toss ideas into a manila folder, then when the folder gets really fat and I’m starting to get a sense of the character and the story I start to think, “Who is this and what is their journey? And, how do I tell it using the best of what I’ve got here?” Then I start to work out which of those ideas I’m going to use.

“I’ve got various plotting tools that I use where I’ll draw up a timeline or I will know that there will be particular scenes that I want in there and I’ll have several different plot lines and I will have a sense of how each of them will play out and I’ll write those notes on cards and spread them out on the floor in their different plot lines and then eventually merge them all so I can pick them all up and have 60 scene cards in the order I’m likely to write them, or at least a good working order. Then I create an outline document.

“In order to get to that stage I’ve put in a lot of thought about the characters and the story and found a lot of the details and thought, “How will this person observe this particular thing?” “What details can I find or let the reader know about the situation, but will also be telling about the character?” And along the way I start to hear them talk and I make note of the dialogue and that allows me to kind of construct each one as an individual.

“I know that … there are some people who will set out to write a novel based on half a page of ideas, but that’s a very different process and often a much slower process and a process that might involve throwing a lot of words out along the way. I prefer not to generate too much stuff that I’m going to throw out, so I prefer to answer lots of my questions when I’m in that kind of developmental stage, before I sit down and do the first draft.” –

“The problem with saying, “Do you plot your novels out in advance?” is that people tend to think of plotting and not plotting as being binary opposites, they stand in opposition to each other. Well, in actual fact, all creative artists use some method of planning and plotting, and some method of allowing space for new inspirations and creativity. It’s a spectrum of behaviours.

“My notebook is a way of chronicling my creative journey towards the novel, showing the way that I discover the story and allowing me to keep all of my research, all my ideas, all of my inspirations in the one spot so that wherever I go I can carry it with me and I look back on it and I can be reinspired and I can remember what it is that I’m trying to do.

As far as plotting goes I would normally always have a strong sense of my narrative arc, I would always know my key emotional peaks, my key psychological turning points, I imagine it like a bracelet with bright glittering beads on it. But, I don’t always know how I’m going to get from one scene to another, and I don’t always know how I’m going to solve a particular problem in that scene. I might know that my character, my heroine will be in a terrible situation, but I may not know how she’s going to get out of that terrible situation. I always leave lots of room in the book for the answers to come to me as I need them.”

“It’s very organic and chaotic. I never know what I’m doing, which makes it extremely tiring. I guess I might start with place. With this book that I’m writing now [note: this interview was conducted during the writing of Charlotte’s latest acclaimed novel The Natural Way Of Things] I knew fairly early on — well, I probably knew before I began that it was going to be set in a prison for girls, like late teenage girls or girls in their early 20s, young women I suppose. I knew that, but that’s all I knew.

“I didn’t know what was going to happen, I didn’t know who the people were, where it was. I gradually thought of when it was set, it was going to be set in the sort of ‘70s, ‘60s and ‘70s and be quite a realist sort of novel. Then I had a bit of — I tend to have these breakthrough ideas (very infrequently, unfortunately) that then change the course of the book for the next six months or a year. Then I have another, “No, this is what is going to happen…” I can see a little way ahead, but that’s in terms of the plot, I suppose. But, it takes a long time to work out what’s going to happen, and I go down many, many false trails and throw a lot of stuff out.”

“I wish I could write in order and have a plotline. It doesn’t work for me, I did try, the writing was terrible, it didn’t have any heart. I went back to what I know, which is following character, following energy and just writing scenes and not really knowing what the storyline is.”

“I just start. I have an idea of what it’s about and a kind of rough outline in my head, I barely even write anything, as in notes or spreadsheets, I don’t do any of that. If I do write notes I tend to lose them, it is just in my head and it changes as I go. It takes a while.

At the point where I write — this is what I do, I sit down and I write, say, 800 words, then I go away and come back. I read over those words again, I edit them as I go and then continue in a really boring methodic way. In one sense, the kind of day-to-day writing sense I’m quite boring and methodic, I just sit down and do it A to B, but in another sense, in the big picture I kind of have no idea what is going on either.”

“I don’t plot. All I do is sort of come up with the premise. Often the hook for the book is a real life event … each of my novels is seeded in a real life event or a case. … Invariably I’ll just create the characters and create the dilemma and then let the whole thing unfold. It does mean throwing a tremendous amount of material away at times, but it also means that it’s incredibly organic.

“When I come in from my office and I say to my wife, “You would not believe what happened today,” excitedly, I’m as surprised as what the reader is when something has happened. I’m not saying the characters tell me what to write – because that would make me insane, hearing voices – but, they don’t always do as they’re told, the characters. That’s the process. Where that little Eureka moment comes to you and you suddenly think of a twist or a hook or something, and it is tremendously exciting.

“[I] start from nothing. I keep wondering if I’ll change, so far that’s the way I’ve done it. Because I don’t know what’s going to happen next I do have a terrible habit of going back and editing what I just wrote the day before because that’s easier than not knowing what’s going to happen. Therefore at the end I don’t have to go back and redraft. For me, it makes it more interesting, but as I said it also makes it a more fearful process. That’s what I’m always ready to change. I read about other authors who have it all planned out and how they therefore write quicker, maybe when I grow up I will.”

So, to plot or not to plot? Where do you stand on this question?

Would you love more writing tips and advice? Check out my book So You Want To Be A Writer: How To Get Started (While You Still Have A Day Job), co-authored with Valerie Khoo and based on our top-rating podcast.