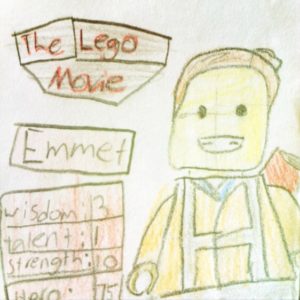 The boys and I went to see The Lego Movie on Sunday, with a few friends. Actually, by the time we then ran into a few other friends, our children took up the entire back row of the cinema. All the parents turned as one to view this spectacle and had only one thing to say: “What have we done?”

And then the movie began and we forgot about the Mini-Me brigade and focused instead on the mini figures. Or tried to. Between the kaleidoscopic colours, the throbbing soundtrack and the one-hundred-miles an hour plot, I felt like I was at a 90s rave. Or on one of those funfair rides that you’d like to get off halfway round, just for a breather, but which plunge relentlessly onwards, up and down, round and round… you get the picture.

We had a great time. The boys LOVED it. They went home and immediately began reconstructing bits of Bricksburg on the sunroom floor (without instructions, in true Master Builder style). I left the cinema blinking … and humming the theme song. Which I’ve been humming ever since.

Have you and your kids seen The Lego Movie? What did you think?