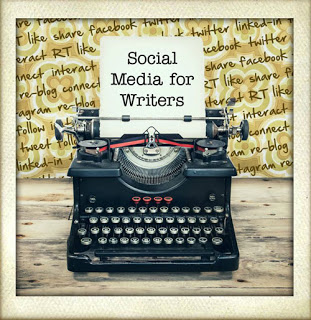 I love Twitter. I do. And that is why it is featuring in this, the second in our series on Social Media for Writers. When I started this blog three and a half years ago, I joined Twitter almost immediately. I’d been told it was a great way to meet other bloggers and get my posts ‘out there’.

So I signed up, opened it up and… ran screaming from the room. How was I ever supposed to do this? Who should I follow? How would I get anyone to talk to me? I ended up following a whole lot of celebs, most of whom tweeted inane things at me, and nobody wanted to talk to me.

A few months later, under pressure from friends who know about these things, I went back in there. This time, I looked for people whose blogs I’d been reading. Then I looked to see who they were following and followed them. I followed people who tweeted great links about writing. I followed writers. And I, timidly at first, got involved in their conversations. I learned the lingo and I learned to love hashtags. I still love hashtags. Hashtags are a fine art.

One of the people I met on Twitter in those (second) early days was Kerri Sackville. I could see straight away that Kerri was good at Twitter. She had a great mix of witty, pithy tweets that could be (and were) retweeted easily, along with conversation, humour and general, well, Kerri-ness. I take great pride in the fact that one of our Tweetversations led to the publishing of her first book (When My Husband Does The Dishes…).

Today, Kerri is writing her third book, along with countless columns, articles and blog posts. She is a lively speaker (we have appeared together on several panels, so I should know…), has been on the tele a lot (Sunrise, Mornings on Channel 9, The Morning Show on 7) and is currently a regular panelist on The Daily Edition (Channel Seven). She also teaches social media courses at the Australian Writers’ Centre.

So, there was no-one better to ask here today to answer some questions about Twitter for Writers.

Will Twitter help me to sell books? How?
Kerri Sackville: “Yes, absolutely. It is HARD to sell books these days. It’s not just enough to have a great book. There are hundreds of great books out there. You need publicity. Every author gets assigned a publicist for about six weeks for every book release (unless you’re a huge name author, in which case your books sell themselves anyway). The more you can do to promote yourself the better. Developing a Twitter following helps to get you name (brand) recognition so that a) people will notice your name in a bookstore and be more likely to pick up your book, and b) people will be aware of your book from Twitter and may take steps to seek it out themselves.”

Do I need huge numbers of followers for it to work?
KS: “Obviously the more followers you have the better. But no, you don’t need huge numbers. Books sell by word of mouth. Even if you have a few hundred followers, they can spread the word to their friends and followers, who will spread it to theirs etc etc. It’s essentially pyramid selling online.”

Top three tips for making the most of Twitter
1. Be funny, interesting, opinionated, or, preferably, all three.
2. Respond to EVERYONE who engages with you.
3. Get chatting to people – break in on conversations, reply to strangers, add to conversations. It’s all about the words!

Kerri Sackville is the author of When My Husband Does The Dishes… and The Little Book of Anxiety. Find Kerri at her blog Life And Other Crises, say hello on Facebook or, of course, on Twitter!