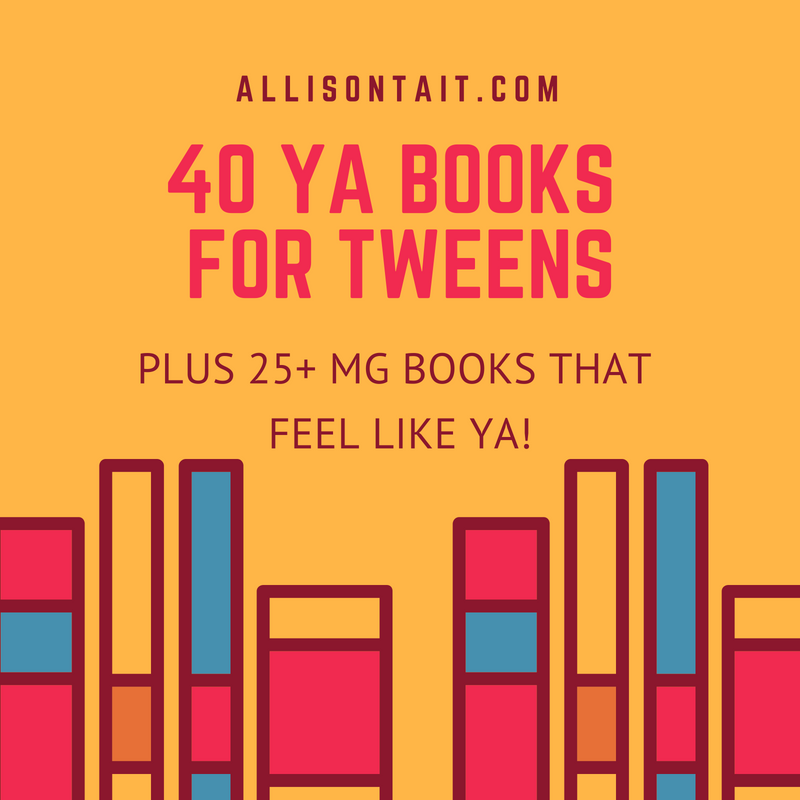 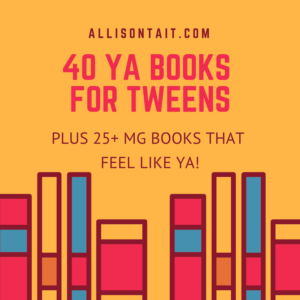 Aside from ‘what to read after Harry Potter?’, the most frequent question that come up in the Your Kid’s Next Read Facebook group is this one: ‘Can anyone suggest YA fiction suitable for a tween?’

While there is an entire ‘middle-grade’ (8-12) section of the bookshelf available, many tweens, particularly advanced readers, want to move up. They want to read what older kids are reading and, often, they’ve read the library dry of the books deemed appropriate for their age group.

They’re hungry readers, and parents are often at a loss as to what to give them to read next – because, let’s face it, just because you can read a book, doesn’t necessarily mean that now is the best time to read it. It’s not just that YA fiction can feature themes and subject matter that’s just not suitable for tweens, but that books are best enjoyed when you’re ready for them.

Go in too early with a book that you love and your young reader may put it aside after a chapter or two, and never, ever pick it up again.

So, because I am the helpful sort, I have canvassed not only the YKNR group members (made up of nearly 4000 parents/booksellers/librarians/publishing professionals/teachers/grandparents/authors), but other interested parties (authors, booksellers, librarians) to come up with this list* of YA books that they would recommend for tween readers.

I’ve cheated a bit (not really but it sounds intriguing, right?) by splitting the list into two sections – what I would call Proper YA (aimed at readers 14+) and then a section that is Technically Middle-Grade But With A YA Feel. It might be that your younger tween is just looking for something in the latter category that feels more grown-up than what they’ve been reading. Proper YA has been divided into categories,  but other than that there’s no particular order.

As with any book recommendation, you know your child best, so be sure to read the book’s description closely to make sure it will be suitable for your particular reader – as noted below, some series get darker as they progress, so look beyond book #1, and check with your local bookseller or librarian regarding any themes or storylines you may be wondering about!

Good luck – and do join us over in Your Kid’s Next Read if you have any questions about these or other books for your young readers!

The Other Side Of Summer by Emily Gale “Had some mature themes but nothing inappropriate for the younger readers.” – YKNR Member

How To Hang A Witch by Adriana Mather (Kid review)

The Wonder Of Us by Kim Culbertson (Kid review)

The Ethan I Was Before by Ali Standish

From The Cutting Room of Barney Kettle by Kate De Goldi

The Moonlight Dreamers by Siobhan Curham (Suggested by Una (12))

Silence is Goldfish by Annabel Pitcher

The Incredible Adventures of Cinnamon Girl by Melissa Keil

I Am Not Esther by Fleur Beale

Two Summers by Aimee Friedman. “A really good book that provides a gentle intro to this theme.” – YKNR Member

Eleanor and Park by Rainbow Rowell “Is sweet… Some more serious stuff touched on but not too heavy.” – YKNR member (Kid review (mini))

Children of Blood and Bone by Tomi Adeyemi (series)

The Hitchhiker’s Guide to the Galaxy by Douglas Adams (series)

Arkanae by Lynette Noni (series) “Recommended for tweens/teens done with Harry Potter. The themes get darker as it progresses but not too much that they cause problems. It’s not overly romantic and has a great focus on adventure and friendship.” – YKNR member (Kid review)

Contagion by Teri Terry “I’ve read the first book in the series. I loved her ‘Slated’ series too but it got darker by the third book.” – YKNR member

The Shadow Cipher by Laura Ruby

The Other Side Of Truth by Beverley Naidoo

Salt To The Sea by Ruta Septys “Perfect intro to World War Two – historical fiction without language or storylines that are too advanced.” – YKNR member

Once series by Morris Gleitzman. ‘It’s in hot demand with the Year 6s at my primary school library – girls and the boys.” – YKNR member

My Life as an Alphabet by Barry Jonsberg

The Thing About Jellyfish by Ali Benjamin

The Goldfish Boy by Lisa Thompson

Fish In A Tree by Lynda Mullaly Hunt

Being Miss Nobody by Tamsin Winter

Survival Strategies Of The Almost Brave by Jen White

Olive’s Ocean by Kevin Henkes “Deals with a first realised crush that doesn’t turn out the way she hopes.” – YKNR Member

The Girl Who Drank The Moon by Kelly Barnhill

The Doldrums by Nicholas Gannon “The next level up for Lemony Snicket fans.” – YKNR member

The Timeslip series by Belinda Murrell

The Family With Two Front Doors by Anna Ciddor “There’s lots to talk/think about from an historic and a feminist perspective.” – YKNR member

A Night Divided by Jennifer A Nielsen

Nevermoor (The Trials Of Morrigan Crow) by Jessica Townsend

The Girl Who Brought Mischief by Katrina Nannestad

Are you new here? Welcome! If your middle-grade reader loves epic adventure stories, be sure to check out my two series: The Mapmaker Chronicles and The Ateban Cipher – click the title links to find out more.

24 books for tween boys with ‘nothing to read’

100+ great books for your young reader

YKNR: Recommended reading lists for kids 10+, 12+, YA for Tweens

*As with all my book lists, if you click on the title it will take you to online bookstore Booktopia, where you can read the blurb and purchase the book if you like the sound of it (disclosure: this will result in a small commission to me at no extra charge to you). International visitors will find most of these titles in either paperback or ebook form on Amazon. Australian authors are denoted with a •