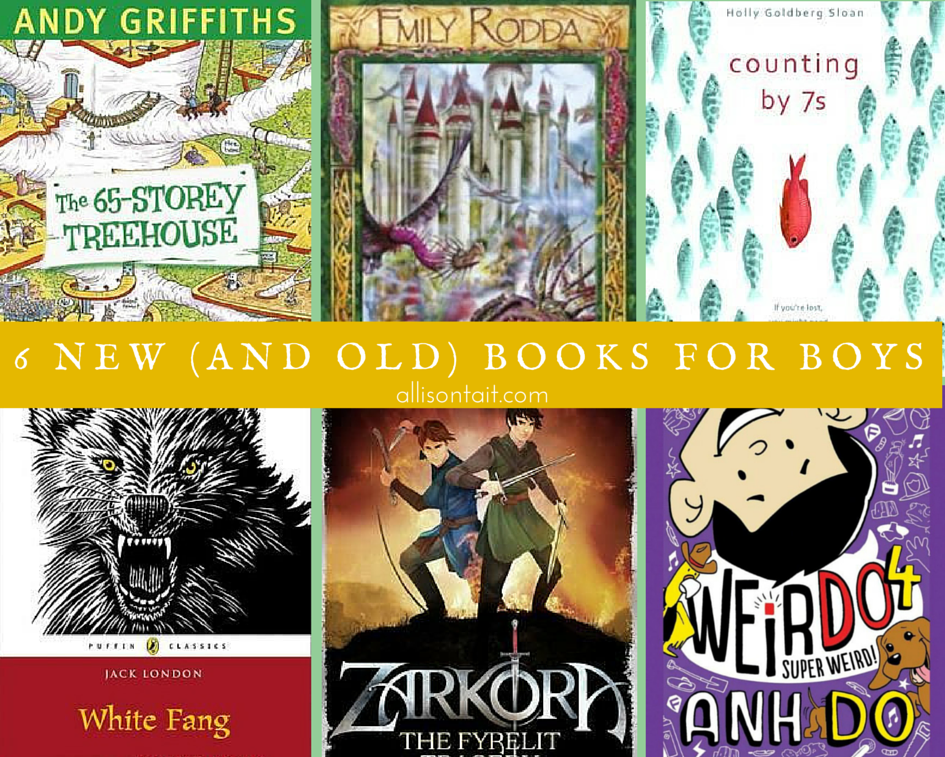 Looking for books for boys? Given that we’re in the middle of the school holidays and we’re all about the books ’round here right now, it seems an opportune moment for a round-up of some of the boys’ recent reading favourites.

Mr11 recently read the first book in the Zarkora series, which was initially self-published by brother and sister team Nicholas and Alison Lochel, and was then bought by Hachette Australia and re-released, with The Fyrelit Tragedy appearing on shelves last week. He describes it as a ‘fantasy story with everything’.

Mr8 is completely absorbed in the Deltora Quest series by Emily Rodda, which is a huge bonus for me as a parent because (a) it’s excellent (15 million copies sold worldwide) and (b) there are SO many books, with three connected series and a realm of related books as well. With a new series (Star of Deltora) coming in August, now’s a good time to test the Deltora waters…

Mr11 is reading White Fang by Jack London, and loving it. I remember reading this one at school and it has stayed with me for (cough) years, so I’m thrilled to see him enjoying it as much as I did.

Mr8 has whipped through Weirdo 4: Super Weird, and considers it a worthy successor (that is, funny and silly and a teensy bit naughty) to the first three in the Weirdo series by Anh Do.

Mr11 read Counting by 7s by Holly Goldberg Sloan. “It was an unusual choice for me, Mum,” he says. “But I really enjoyed it. It reminded me a bit of Wonder [by R.J. Palacio, which his teacher is reading them at school].”

Mr8 is counting down the days until The 65-Storey Treehouse, by Andy Griffiths and Terry Denton, is released on 12 August, 2015. I had very terrific chat with Andy Griffiths on my podcast last week about writing… and bumosaurs. Seriously, if you’re interested in writing, for kids or adults, or in what kids love reading, have a listen (Episode 67).