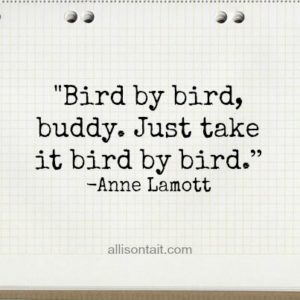 My plate is rather full at the moment. Satisfyingly full. Some might say that it’s heaped too high, but I’m trying not to think too much about that, concentrating instead on the satisfaction of it all.

I am one of those people who likes being busy. I know that this is a modern failing and I promise that I am not wearing my busy-ness like a badge of honour. Rather, I am allowing it to fuel me.

When I have acres of time, I tend to drift along, getting very little done. Because there is so much time, you see. I do my paid work and then… I just sort of amble around social media.

It is now, when I have a huge amount to do, that I get all efficient on myself. Given three hours in which to work on my current fiction manuscript, I will achieve about 1500-2000 words. Given only one hour, because I must squeeze it in around everything else, I will achieve… about 1500-2000 words. On a good day. On a bad day, maybe 900-1000, which is still a better per-hour output than when I have time to burn.

Whenever I’m faced with a mountain of work and the whelm factor is high, I remember these words from Anne Lamott:

“Thirty years ago my older brother, who was ten years old at the time, was trying to get a report written on birds that he’d had three months to write, which was due the next day. We were out at our family cabin in Bolinas, and he was at the kitchen table close to tears, surrounded by binder paper and pencils and unopened books about birds, immobilized by the hugeness of the task ahead. Then my father sat down beside him put his arm around my brother’s shoulder, and said, “Bird by bird, buddy. Just take it bird by bird.”

That’s where I’m at right now. Taking it bird by bird.