Ghost of Christmas (story) past 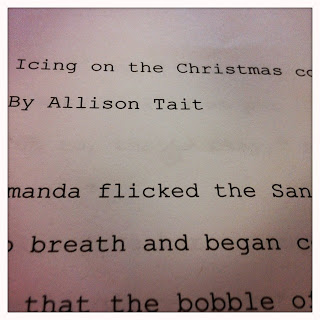 Today I did a year’s worth of filing. It was about as inspiring as it sounds. But…

My filing unearthed a ‘Christmas story’ that was rejected by the English Women’s Weekly about five years ago (Lord only knows why it was still hanging around the ‘to be filed’ file). The title was terrible – Icing on the Christmas Cookie – dear God.

Surely it got better?

I read it with great interest for, by now, it reads as though it were written by someone else entirely. Why did they reject it, I wondered, as I perused the opening lines?

It was all okay. Which was probably the problem. Okay, as in, not terrible but not outstanding in any way.

Until I got to this bit.

“Wrapping paper littered the room like confetti, the Christmas tree had given up its load of presents like Papa Penguin sending off his eggs to hatch, and Amanda had taken another 50 photographs to add to the 1000 unprinted images on her computer’s hard drive.”

Papa Penguin? Methinks someone had been watching too much David Attenborough at the time of writing.

That’s the thing with writing. So much of it is impacted by what’s going on in your life at the time.

Just another reason to put manuscripts away in a drawer for a while before going back to edit them.

Are you sometimes surprised by things you’ve written in the past?