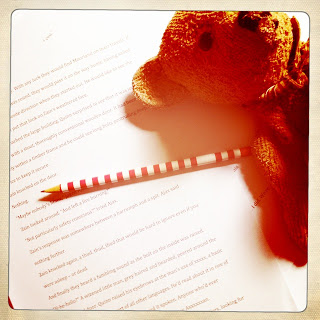 The writing process is a mysterious thing.

One of the joys of being a ‘pantser’ (that is, someone who writes by the seat of her pants, with no plotting in advance) is reading through the story once you’ve finished. Half the time, you can’t remember a word you wrote and so you end up reading a book that was, ostensibly, written by someone else. Or at least I do.

You may remember that I took part in NaNoWriMo in November last year. While I didn’t ‘win’ and hit the 50,000-word mark, I achieved a respectable 46,000 words or so and ended up within spitting distance of finishing my story, a children’s manuscript. I started the month with a paragraph of an idea and ended up with an epic adventure. How this occurred is a mystery to me, too.

I think one of the most valuable things about an exercise like NaNoWriMo is the fact that to make the word goal, you have to simply write. Words on the page. And when you have to get them out, it’s amazing what comes out of your subconscious.

It’s not yet finished, but his advice so far: “Chuck in a few more battles, Mum. That’ll sort it.” I might add that this is always his advice. (I’m thinking that nuanced character studies may not be his forte.)

So now (having done some hasty research on ‘how to write battle scenes’) I’m going back to page one to review it all.

I’m actually looking forward to it.

There’s nothing better than editing someone else’s work.

Do you ever read something you’ve written and think ‘where did that come from’? Or is it just me?