Three things I’ve learned in my third year of blogging 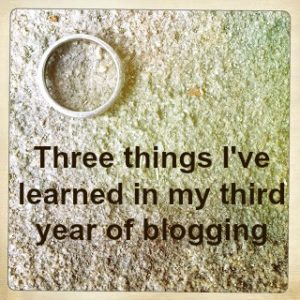 Today marks the first day of my fourth year of blogging. Amazing to think that I’ve been here at the Fibro for more than 1000 days. I think you get less for certain crimes these days…

So here, in no particular order, are the three things I learned in my third year of blogging:

1. Money changes everything. Think long and hard about whether you want to ‘monetise’ your blog – and how you might do it – because the minute you do, it all changes. I know this because I’ve watched it happen. I have no judgement to make on whether the changes are good or bad, because I think they’re different for everyone. But go into it with your eyes wide open. Writing for money changes your writing. This I know.

2. Blogging is like marriage. It has its ups and downs, its better and worse. I’ve found it much more difficult to maintain my passion for it this year, mostly because I’m writing ‘third’ anniversary posts. The first time you write an Anzac Day post, it’s full of all the things you think about Anzac Day. The second time, it’s the first time with some add-ins. The third time… well, you’re as likely to pop up a picture of a flag.

It’s not easy to front up to the same blog on a regular basis and find things to say. These things need to be worked at. Like the best marriages.

The best bloggers are the ones who can keep it fresh every single time. Who write, as the venerable Mrs Woog told me once, as though every reader is visiting their blog for the very first time.

I take my hat off to them.

3. Your team is the key. I’ve written before about the importance of community in blogging. So many times. But this year I’d like to recognise Team Fibro. The people who take the time to visit this blog, comment, share my posts, and generally just pop in, have been my cheerleaders in a year of writing, edits, highs, lows, and general ennui. Never underestimate the power of a good team, particularly when you’re working on your own.