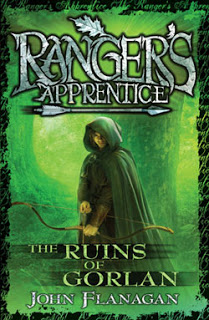 Mr7 and I have found a new reading obsession. The Ranger’s Apprentice series by John Flanagan has captured his imagination – and mine. Actually, mine first. I was searching for books that would be suitable for him, and was given a few recommendations by our new best friend at one of the local bookshops. She knows us, you see, and always has something to suggest for him when we pop in.

She handed me the first Ranger’s Apprentice with this review: “He’ll love it, and best of all it stays at the same level throughout the series.” No more shades of Grumpy Harry Potter, who gets darker and more bewildering as he advances through puberty.

I handed it to Mr7 the next morning. “You’ll love it,” I said. He took it from me – and refused to read it. I think I was just a little bit too enthusiastic. I keep forgetting I’m his mum. Who wants to read what mum thinks is good?

It took months, but finally, on a slow news day, he picked it up. And was hooked. He’s now zooming through book four and has book five lined up, ready to go. (I would just like to say at this point that I haven’t even said ‘I told you so’… much.)

In true Mr7 style, he is now writing his own book. It is called The Four Archers, and he assures me that any resemblance to the Ranger’s Apprentice (which features archery – heavily) is absolutely coincidental. Note to self: revisit the plagiarism discussion.

“How many words will I need to make it into a real book?” he asked.

“Do you mean the Ranger’s Apprentice books are 5000 words long?” he asked.

Tell me about it.

I suggested that he might like to try writing a summary of his story first – a plot outline – and then writing the book based on that.

Tell me about it.

The apple doesn’t fall far from the tree.