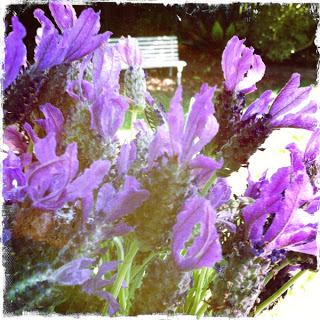 Gardening is a surprising business. Even with all the instructions, conditions, fertiliser and prayers in the world, some plants simply never prosper.

They decide they don’t like your plot of land and simply turn their toes up at it. Others will thrive, despite a perfect storm of neglect, bad soil and lousy location.

At the beginning of winter this year, The Builder and I planted some dwarf, winter-flowering Italian lavender. They were very cute. Small, perfectly formed.

We placed them gently round the bottom of a new camellia (for which we had high hopes) and sat back to watch.

Today I approached said ‘dwarf’ lavenders with pruning shears in hand. They had, to be brief, run amok, squeezing the life out of the camellia (for which we had high hopes). They had flowered over winter, flowered during spring and were about to flower again.

Meanwhile, we had been waiting for them to finish flowering so that we could ‘tip prune’ them – as per instructions on the label. They didn’t finish. No tip pruning. Which means lots and lots of dead lavender heads adorning their spiky fronds.

The time had come to cut those suckers back.

I began with the secateurs, gently teasing each dead lavender head from the foliage and delicately snipping it off. I did this for about 15 minutes and then stood back to admire my handiwork. Large pile of dead lavender heads on the path – no discernible difference to the plants.

Something more brutal was required.

I called The Builder outside (from grouting duties) to confer. We decided that I would take a third off each plant.

“Back to the basic structure,” he said. “Get rid of the faff.”

So I pulled out my Edward Scissorhands shears and began hacking in. Spears of lavender went everywhere, landing at my feet. Wait a minute, I thought to myself. These are flowers. Beautiful, deep purple flowers. I put down the shears, ran inside for a container, picked up the secateurs and snipped off a huge bouquet of lavender.

That done, I hacked into the bushes again, reducing their bulk by one-third, back to the wood, shaping them as I went. As I got towards the end of my task, I began to leave the new shoots I could see, taking care to cut around them – after all, I would like a few summer flowers from my winter-flowering lavender if possible.

My lavender shrubs are now neat and tidy, ready for whatever summer will bring. The removal of the dead heads allows more sun to penetrate, allowing for even more growth. The camellia (for which we have high hopes) is once again the star, and has enough room to breathe.

The whole time I was undertaking this exercise, I was thinking about editing.

The first time somebody asked me to edit my full-length manuscript, I went in very gently, snipping a few bits here, changing a word, putting in a comma.

Then a structural editor got hold of my manuscript and told me, in no uncertain terms, that I had started with the wrong character and that the whole thing needed to be turned upside down until the basics of the story and the characters was revealed. I did that, putting aside some bits I really loved, the ones that weren’t quite right for this story, and storing them away. You never know what you’ll be able to use again.

And even as I hacked away at my manuscript, I discovered new shoots. Things I hadn’t noticed before because I was too busy concentrating on the showy stuff. Kill your darlings, they say. If a scene or a character or a line is only there because you love it, not because it advances the story, it has no place in this book.

Once I’d finished editing my manuscript, I had a much better book. Much better. But I’d never have found it if I hadn’t got the pruning shears out and gone to town on it.

Lessons of the day: 1) quick and brutal beats death by 1000 cuts. 2) Your first draft is not your manuscript. It’s really not.