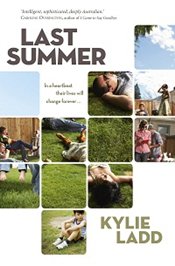 One of the things I love about Australian author Kylie Ladd’s writing are the tiny composite pieces that make up her characters. The smallest details are often the most telling.

Here, Kylie answers questions about how to create characters. Specifically, how she creates such three-dimensional characters – and how she keeps all those voices straight!

In both After the Fall and Last Summer, you worked with multiple viewpoints. What is the key to keeping all those different voices straight?

Kylie Ladd: “Planning! I’m a bit of a planning addict, as you know, and I certainly love a spreadsheet or two. I use notes to keep track of character attributes, but I also keep a fairly detailed running spreadsheet that summarises what’s happened in each chapter (whose point of view (POV) it was, what happened but also any particular themes and emotions I wanted to convey or develop) and I can also use to look ahead and sketch particular developments for particular characters. Sometimes with all those spreadsheets open my laptop makes me look like an accountant rather than a novelist, but whatever works… ”

I know that you do a lot of work on your characters before you even begin. How do you build them?

KL: “Actually I’m not sure I do, or that I do enough… I think that while I often have ideas for characters and sketch them down before I start the novel, the character only really evolves and becomes clear to me as I get into the writing. As a result I find that the bulk of my edits are usually in the first third of the book, where I’m still figuring out exactly who I’m writing about.

Kelly in Last Summer is one example… I had planned her first chapter, where she gives Rory’s eulogy, and thought it – and she – were fairly straightforward. But then I got almost to the end, where she returns to her seat in the congregation next to her husband Joe:

“Joe reached for her as she shuffled down the pew, the arm that went around her shoulders as solid as marble. She squeezed her eyes shut and breathed in his scent: timber, sweat. Girls were supposed to marry someone who reminded them of their fathers, weren’t they? Yet here she was holding on for dear life to someone who smelled just like her brother.”

That bit just came to me as I was writing, but once it did it made Kelly, and her relationship with Rory, so much clearer to me. I went back and re-wrote the chapter, but after that Kelly was set in my mind, and her subsequent scenes were far easier.

Something I also want to mention briefly is character names. I agonise over choosing these, but to me (rightly or wrongly) names are important, and can define a character, can give you a start on getting to grips with them. Sometimes names are attached to an important personal history, as in Trinity’s case, but even if the name is as straightforward as Joe’s I still think (or hope) that that conveys something – in this case a lack of pretension, of frills; a straight-shooter. That said, I have never, ever liked my own Christian name… maybe I’m trying compensate when I name my characters.”

How do you get into the right mindset to write your male characters? What are the keys to keeping a man ‘real’ (so to speak)?

KL: “To be honest, I don’t approach or even think about writing male characters any differently than I do my female ones. Maybe I should, but to me gender is secondary- we’re all people first, we all have fears and hopes, regrets and ambitions, and that’s the stuff that really interests me. I don’t believe that deep down men and women are really that different, so I don’t approach writing them any differently.  OK, men talk about cricket more – but that wasn’t hard to bring to life in Last Summer because I live with one like that!”

Do you find that everyone you know looks for themselves in the characters you create? Do you ever use tics and foibles of people that you know?

KL: “Of course I do. Any writer that says they don’t is lying! How can you not, even if only subconsciously? I would never model an entire character on someone I knew – that feels like cheating, somehow, as well as being bound to play havoc with your personal relationships – but I’m not at all averse to picking up the odd tic or foible, as you say.

As a literary device, they’re useful for delineating characters, but more importantly I think they also say a lot about who a character is – in Last Summer, Kelly’s habit of driving through roundabouts in third gear, too impatient to change down, or Anita fretting about letting her only child eat junk food. And yes, I’m sure people I know look for themselves in my characters… but that’s the danger of being friendly with a novelist. As Nora Ephron once said “Everything is copy.” She’s damn right. They’ve been warned.”

Are you working on a new novel? What was the ‘spark’ for it?

KL: “I am about 1000 words off finishing my (fingers crossed) next novel. After near-drowning in a sea of my own words for the last 18 months or so it’s a huge relief to finally see land. Of course, this is only a first draft, so there’s heaps of pain to go yet – nonetheless, I’m pleased that (until I see my editor’s report, of course) I think I’ve achieved what I wanted to.

I am hideously superstitious about talking about work that isn’t contracted to be published, so sorry, but I can’t say much… I will say though that this novel is about the different ways we make – or find – family, and whether or not blood matters. At this point it’s called Into My Arms. I hope Nick Cave doesn’t mind.”