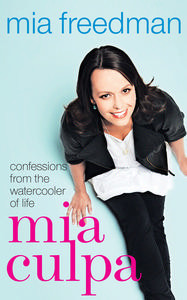 Mia Freedman’s latest book launched into bookshops around the nation today. Mia Culpa: confessions from the watercooler of life (Penguin) is the newest installment in her series of books about her life, her thoughts, and, always, her opinions.

She has discussed magazines, motherhood and mistakes. She now takes on pubic hair, social media and that moment in life when you go from being cool to being… not.

Among other things, of course.

All of which provides the perfect excuse to drag her into the Fibro to answer a few questions.

The disclosure: Mia and I first met 1000 or so years ago (mine, not hers, because clearly she is not as old as I am) when she was editor of Cosmopolitan and I was dabbling in freelancing for the first time. I remember sitting in her office, surrounded by smiley Cosmo covers, wondering if I was wearing the right shoes. (In my defence, the Cosmo offices have had that effect on stronger women than I.)

She was bright, smiley, clever, gorgeous… the kind of woman you’d find reasons to dislike given half a chance. But she was also warm and friendly and, as she remains, incredibly supportive of other people’s talents, insecurities and efforts. It was thanks to her that I got to write the now world-famous Hairy Armpits story. The rest, as they say, is history.

So yes, thanks for asking, I have great admiration for Mia’s work. I don’t always agree with her, but I respect her for tackling the big issues head-on on her website Mamamia and most weeks her Sunday Life column makes me nod in acknowledgement and laugh out loud.

Plus, she has graciously agreed to answer my five questions about blogging, branding and the boundaries of personal writing. So what’s not to love?

You often draw on your own experiences for your columns, blogging and writing – what are your boundaries for your personal style of writing?

Mia Freedman: “Well, it’s always changing. I have to be careful. Just when I thought I was very clear about my boundaries in writing, I recently told a story at a dinner party which completely embarrassed my son. Not that that’s particularly difficult – he’s a teenager – but his age is problematic. So much great material for me to write about and much of it is about my own experiences and reactions as a parent of a teenage boy, but I’m on eggshells there…

“Generally, I try to have a rule that everything is okay so long as I’m the punchline. I go to great lengths to protect my friends and family – I’ll never put my writing in front of their feelings or their right to privacy. But mostly they’re very accommodating. Which is lucky, because otherwise I’d have nothing to write about!”

I remember reading somewhere that you’d rewritten parts of Mama Mia, your memoir about magazines, mistakes and motherhood, because you felt you’d crossed over the line into ‘too personal’ – can you explain what ‘too personal’ means?

MF: “Memoirs are extremely difficult and sensitive because you’re not just writing about your own life – you’re writing about the lives of everyone in your life. So there were some things in there that were not mine to share and needed to come out. My choice. They didn’t affect the story.

“The first draft would have been a bad book, actually – too raw, too emotional and just a bit all over the place. I kept probably 80 per cent of it and the end result was more balanced. Just as personal, but more layered and thus, in my opinion, a better read.”

What do you see as the difference between blogging and writing for other media such as books and magazines?

MF: “I haven’t written for magazines for years, although my column appears in a newspaper magazine… Still, that’s different. It’s not a monthly glossy or a weekly tabloid. Every type of writing I do – from Twitter to books – is different. It requires a slightly different approach and, often, a different tone. Since I’m constantly flitting between social media, Mamamia, my column and books, I barely even have to think about it now. Although, books can be a bit of a gear shift. You need to lengthen your concentration span, which is reduced constantly by tweeting and blogging.

“The slowness of books is both my biggest frustration and greatest joy when it comes to that medium. I’m into a pretty fast turnaround and short deadlines – with Mamamia, we often post within minutes of having an idea and Twitter just publishes practically before you’ve even thought something through (danger! danger!). But taking it slower and having more time to refine what you’re going through to say is a luxury. I’ve come to see writing books like that.”

Bloggers and writers are often encouraged to ‘build their brand’ – but is there a downside to your name becoming a brand? Do you think people fail to separate the ‘brand’ from the person, resulting in personal attacks?

MF: “The brand is the person in many ways, at least it is for me. It’s too much effort to have to turn a brand on and off. I’m just myself, flaws and all. Hence the name of the book! I am inextricably linked with what I do and what I say and I’m fine with that. I don’t take on any commercial arrangements that I don’t believe in and I’m always transparent about them. You have to be!

Mamamia, the website, is about to undergo a big change, morphing from blog to fully fledged web magazine by all accounts – what’s the reason behind that? Will there be less Mia?

MF: “Mamamia hasn’t been a personal blog for a long, long time. There’s only so much one person can say! And I never wanted to do a personal blog or a mummy blog. Love them, but it wasn’t for me. I wanted to create something for a broader audience, with lots of voices, all as relevant and important as mine. I will assume the same role on the new site as I’ve been taking for a while on Mamamia – that of editor and publisher. So, in short, not less Mia, no. But more of everything else.”