Starting Out #2: What kind of writer will you be?

Advice for Writers | Starting Out | Writing 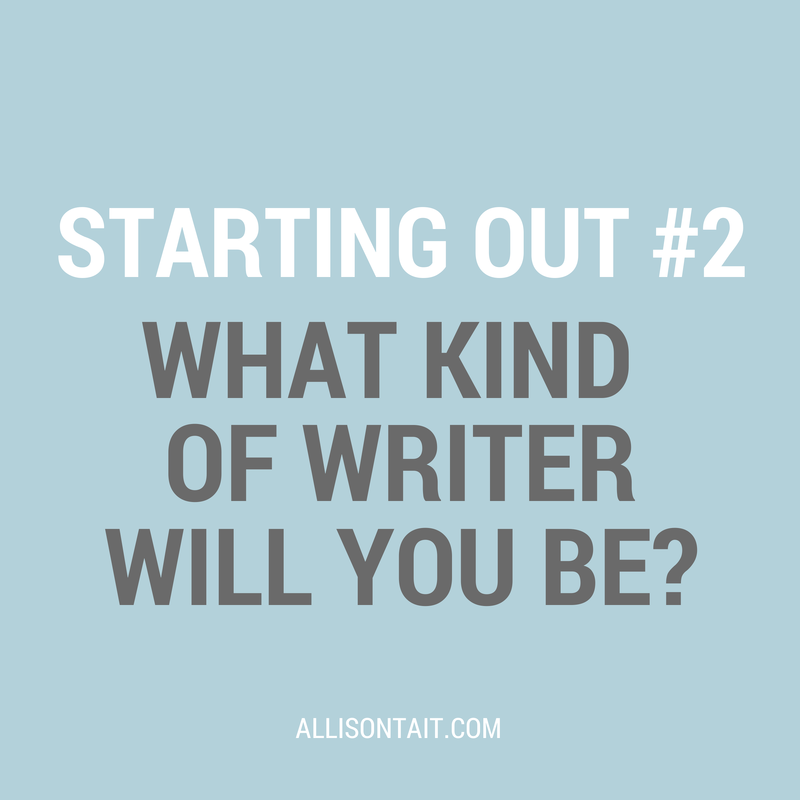 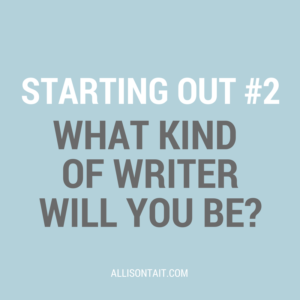 Some writers dip in and out of several of these of categories. Some specialise in just one. Many of them started out in journalism with me. A few of them jumped straight into novels and have never deviated.

My point is that writing is one of those jobs that can take you in and out of several industries, job descriptions and time zones. Working out what style your writer hat (or wardrobe of hats) will take is half the battle.

Just ask Anna Spargo-Ryan, author of this week’s Starting Out post. Anna is another of my favourite Twitter finds. One minute I’d never heard of her, the next she was a constant and welcome part of my Tweet life. She’s one of those social media cool kids, but never bores a person with talk of SEO and engagement. She writes a clever, insightful blog about whatever is top of her mind at the time, and she’s seriously good at 140 character soundbites. She’s also branching out into other kinds of writing. Lots of different types.

But I’ll let her tell the story…

“Writing. It’s a word, but it’s also a lifestyle choice.”

When I decided, in primary school, that I wanted to be a writer when I grew up, I was pretty sure that was all there was to it.

“I’m going to be a writer when I grow up,” I said, and adults rubbed my hair and said I would probably be an administrative assistant instead.

“Bugger you,’ I said, because I was a very mature six-year-old.

People ask about your career aspirations a lot, when you’re a kid. “A writer,” I kept telling them. Years passed. “A WRITER. Have you thought about having your ears candled?”

Then one day, my English teacher sat me down and said, “What kind of writer?” and I stopped dead in my tracks. What did she mean, what kind of writer? One who writes books, obviously! How did she even get her degree in teaching English? I laughed in her face.

I wrote words after that, but none of them turned into a book. The longer I sat at my computer without winning awards for trying, the more I thought about my English teacher’s words. I loved writing, but I was shithouse at writing books. Were there really other ways I could express myself?

More importantly, would I earn enough money to feed my family if all I had to sell was half a novel? And not even the good half?

I tried everything. Even 25 words or less competitions became a serious creative outlet.

I started and ended no less than fourteen blogs between 1998 and 2012. They all said the same thing: “wahh, something something miserable.” I liked the freedom to write, and I was both buoyed and crippled by an insatiable need for feedback. My children hid from me as I roared, “MORE COMMENTS!” and beat my chest.

I wrote corporate copy and technical documentation and large tenders. It took a lot of years to find my niche in this area. Surprisingly, there is a very small market for government proposals that include sentences like, “The Radio Frequency engineers have faces like moon cakes.” I’m pleased now to know I’m more suited to writing about biscuits and yum cha.

Feature writing is when you smash your head against a wall until an idea comes out and then send it to someone who tells you it’s the worst idea ever.

It’s been hard for me to realise that creative writing can never be my day job, because I chose to have kids and dogs and cats and expensive chocolate habits. But that doesn’t mean the ‘day job’ has to be working in a knuckle factory. Diversifying my writing has helped me to justify writing a novel instead of being strung out about what I want to be when I grow up. This year I’ve written 22,000 words about an alcoholic mother’s relationship with her adult daughter and I have enjoyed more than 10 per cent of the time I’ve spent doing it.

The good news is, if you write enough things, whatever they are, your brain will begin to enjoy the habit of putting words in order. Spreading your writing around doesn’t diminish the writing, in the same way that it does when you buy eight cats and only have time to love three of them. Writing begets writing. The more you write, the more you feel like you can. The more you expand your writing remit, the richer your writing becomes.

Writing. It’s a word. But it’s also a lifestyle choice.

Visit Anna Spargo-Ryan here, where she blogs sometimes and not always miserably. And say hello on Twitter. She’s really very good at Twitter.