How (not) to name your blog 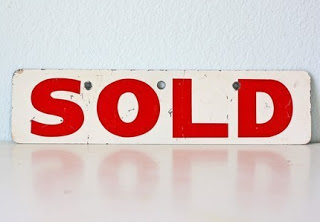 When I started this blog, I knew nothing about blogging. Which is probably a good thing. It stopped me overthinking the whole thing, which would have put off the process by about… two years. I just sort of decided to start one day and by the next I’d begun.

Naming the blog was easy. I gave no thought to niche or SEO or any of the other things that a person is supposed to think about when they name a blog. I didn’t do a worldwide Google search to find out if there were other Pink Fibro blogs. It didn’t even occur to me that most of the world would have no idea what a fibro even is.

I had moved from the Big Smoke to a pink fibro and I wrote about … life. No brainer.

All of which is well and good should a person remain in their pink fibro for the rest of the life in question.

You can see where this is going, right?

The Fibro has a For Sale sign out the front. Actually, correct that, the Fibro has a For Sale sign with a giant red SOLD sticker slapped across it out the front. In six or so weeks, give or take 1000 or so anxiety attacks and stressful moments, Fam Fibro will pack itself up and take itself off to new premises (I only wish it were as easy to do that as it is to write it…).

A yellow weatherboard. A geriatric one. Henceforth known as The Old Girl. We met her unexpectedly, we fell in love and the rest is history.

The first thing that everyone says to me when I say ‘guess what? we’re moving!’ is not ‘yippee, good for you, how exciting!’… no, it’s ‘but what will you do about the blog name?’.

My response: ‘nothing’. In hindsight, I should probably have called my blog Allison Tait’s Blog and been done with it. But, seriously, where’s the romance in that?

The Builder and I have lived in several homes together. Homes on which we’ve lavished inordinate amounts of tender love and care. Each time we’ve moved on, we’ve taken a souvenir. A house number from one. A gate from another. Every single potted plant we’ve ever watered.

When I asked him what we’d take as a souvenir from the Fibro, he laughed. “We’ll take the blog, of course.” No brainer.

So, here’s my thinking. The Fibro has no boundaries. It has no walls. Its spiritual home will remain here on the worldwide web. See, when I write it like that it makes perfect sense, right?

Anyway, I hope that you’ll stick along for the ride and enjoy the next chapter with us. Because, really, Life In A Yellow Weatherboard just doesn’t have the same ring to it at all.

How did you name your blog? Have you ever had cause to question or second-guess your choice?