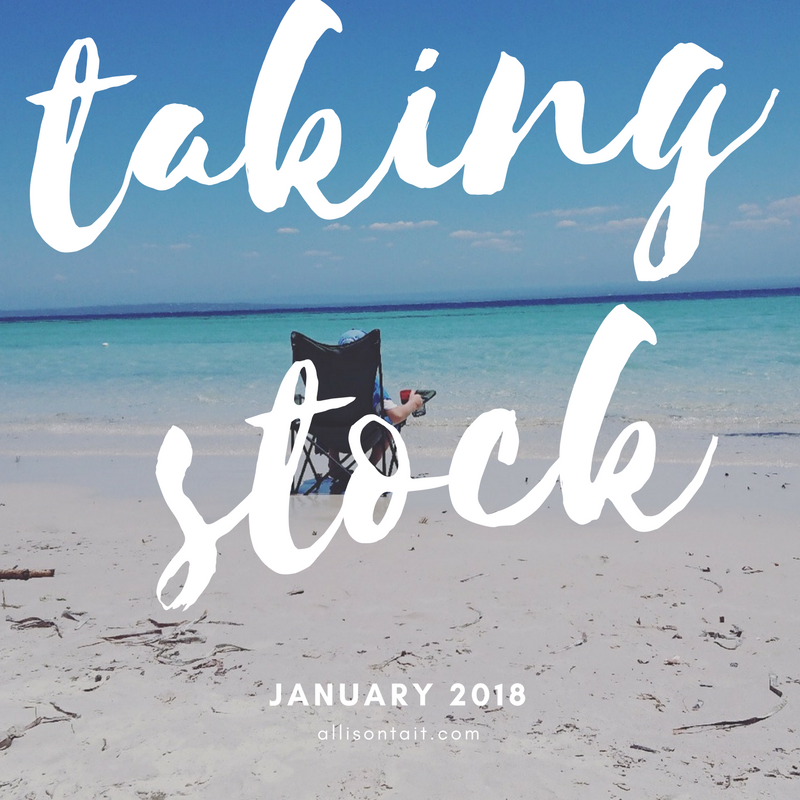 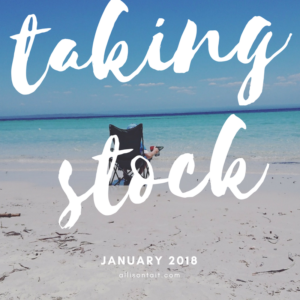 One of my favourite people to visit in the blogging world is Pip Lincolne at Meet Me At Mike’s. Her’s is a feel-good space, full of things that make you go Mmmmmm.

She’s also terribly clever, what with the crafting and the styling and the writing (I interviewed her for the So You Want To Be A Writer podcast here and visited her lovely blog last year with my 5 secrets of being creative when you have no time).

Anyhoo, today Pip popped up a post about taking stock, inviting other bloggers to do the same. I’ve decided to take up the invitation because, as she says:

“I think we need to help each other find interesting things to read about, away from social media, as much as possible. WHICH IS WHY BLOGS ARE GREAT. What we see on social media – Instagram AND Facebook – is controlled by the powers-that-be. We shouldn’t be letting corporations decide what is worthy of our hearts and minds. Please read blogs more – or start your own – to buck the trend.”

So, in the interests of sharing the good stuff, here’s what I’m doing in January. Settle in, there’s a lot to talk about.

Making: A mess. I’m not a maker, unless you count manuscripts in the equation, and have written before about my lack of crafting ability. But it’s school holidays and I am trying to fit in parenting and working, which means that something has to give – and that thing would be housework.

Cooking: As little as possible. It has been so very hot here this month that even thinking about food feels like too much effort. We are eating an awful lot of salad.

Drinking: Lots of water, the occasional beer (I do love a chilled beer on a hot day) and gin and tonic. My current favourite is Four Pillars gin with tonic and a slice of orange. Yum.

Reading: All of the things. No, really. One thing I do in January is to read. If I can’t write, then reading is the next closest thing to working.

I’ve read a lot of YA fiction lately (I think I have an idea brewing), including Words In Deep Blue by Cath Crowley (LOVED), One Of Us Is Lying by Karen M. McManus (very enjoyable), and A Study In Charlotte by Brittany Cavallaro (very good – would read book #2 in the trilogy).

All of these are definitely 14+ reads (despite some 12+ age recommendations I’ve seen) and have been handed to Book Boy so watch out for kid reviews soon.

Next read: While I’m waiting for The Ruin by Dervla McTiernan to come out in February, I’m lining up a pile of books including Working Class Man by Jimmy Barnes (I loved Working Class Boy, for the record) and The Chalk Man by C.J. Tudor.

Wanting: Five minutes to myself.

Looking: At Mr11’s drawings. He’s such a busy kid and I love it when he sits down to draw.

Playing: Book Boy’s first EP. I’m so incredibly proud of what he’s achieved and I simply love listening to him sing. The six original songs were recorded over several months last year and I can almost hear his voice changing with each one (for the record, the last song on the EP was the first one recorded and you can hear it here).

Deciding: We are planning a trip overseas later this year and are in that delicious phase of deciding all the things we might do while we’re there.

Wishing: It was autumn already. It’s. Just. Too. Hot.

Enjoying: Being part of the Your Kid’s Next Read Facebook group. It really is one of the friendliest and most useful places on the internet.

Waiting: Just like Pip, I’m waiting for a package because one of my boys is having a birthday next week. Here’s hoping it gets here in time!

Liking: The wonderful, sharing spirit of the Australian writing community. Being an author can be so lonely, but I have to say that Aussie writers are a great bunch. There’s always someone who’s been there before you and is happy to walk you through your next steps.

Wondering: How best to celebrate my blogging anniversary – I’m up to nine years next week, which is insane! If you have any thoughts on what kind of parade I should have, please share them in the comments!

Loving: Zonin Prosecco. My brother put me on to this stuff about three years ago when it was $8.50 a bottle. It’s now $11.50 or so (gasp!) but, as a budget-friendly, easy-drinking sparkling wine, I’m pretty sure this Italian lovely can’t be beaten.

Pondering: What to write next. I’ve just finished a first draft and I’m editing away, but my mind is always ticking over. I have two other manuscripts that are underway and I’m just deciding which one to concentrate on next.

Considering: How to best manage my diary. As regular readers will know, I’m a paper girl and like to see things written down, but keeping track of school stuff, writing stuff, family stuff, and Book Boy’s music stuff is becoming increasingly complicated. If you have any recommendations for me, please tell me!

Buying: Groceries. Seriously, how can two kids eat so much food?

Watching: The Builder and I are currently hopping between two series on Netflix: The Crown, which I am curiously obsessed with, and Fauda, an Israeli series, which is high on tension (but features some very strange dubbing in places).

Next watch: I’m really not sure. I have to confess that while the world of on-demand television is beguiling, actually deciding what is worth watching is not easy. I will be taking all recommendations.

Marvelling: At all the possibilities a new year can bring.

Cringing: At the fact that I made a complete dill of myself at my local petrol station this week. I won’t go into details, but suffice to say that it involved a 5-litre petrol can and an absolute debacle.

Do you relive those cringey moments over and over again in your mind? I remember reading something years ago, maybe by Wendy Harmer, where she was talking about sitting on a bus and the woman beside her suddenly let out a groan and the writer (Wendy?) just knew she was reliving some embarrassing moment or other. That’s me right now.

Needing: A dishwasher. Yes, I know, this is probably more a want than a need, but really, five years without one is just long enough, don’t you think?

Questioning: Everything. When new parents write about all the things that nobody told them about being a parent, it usually involves a list of sleepless nights and dirty nappies. For me, though, it’s the endless worrying that goes with parenting that nobody COULD ever warn you about. That constant voice in your head asking ‘really, is this the right thing to do?’ is very, very tiring.

Smelling: Murraya. My neighbours have a huge Murraya shrub and my own is rapidly catching up. When I go out into the garden at night, the scent nearly knocks me over and I love it.

Wearing: My sneakers. Seriously, I have become one of those women who just puts on my sneakers in the morning to walk the dog and never takes them off. I am more comfortable in socks and sneakers than barefoot and I don’t know when this happened.

Following: JodiWileyArt on Instagram. I’ve just discovered her wonderful images of stacks of books and I am enamoured.

Noticing: What makes me happy and making a note to do more of it, even if it’s surprising.

Knowing: I need to detach from my phone. Doing the social media work I do makes it way too easy to just ‘check in’ and not leave for an hour. I’m trying to be much more rigorous in my use of time.

Thinking: I need to tidy my desk. But I’m always thinking this…

Admiring: I’m writing a feature for a magazine at the moment about young creative people in my local area, and I’m just in awe of what they’re achieving.

Sorting: My pantry. It’s got to the point where I can’t put anything in or get anything out without something falling on me.

Getting: Excited about the fact that The Book Of Answers is out this year! March 27 might seem like a little way off, but in book launch terms it’s only micro-seconds. I’m already thinking about some of the things I can do to get the word out about the book and putting plans in place.

Bookmarking: So many things. I’m constantly saving links all over the place to share them across my various social media channels, for me and for my clients.

Disliking: A lot of things. But I’m not going to list them here because I stand by my rule about the internet: Just because you can, doesn’t mean you should. I get it, you have an opinion. Great. So do I. But the two of us shouting at each other about it online won’t make a jot of difference. If you really don’t like something, DO something about it.

Opening: The fridge door far more often than I should.

Giggling: At my boys, with my boys.

Feeling: Tired. I know, already. But I’m kind of thinking this is just a state of being for women these days.

Hearing: My boys. Bickering. Again. The long, hot days of January can be very long and very hot. So, enough of the taking stock – we’re off for a swim!

Well, that was quite a list! If you made it this far, I applaud you! I’d love to see your own Taking Stock post – if you write one, pop it in the comments.