Industry Insider: Why I self-published my memoir 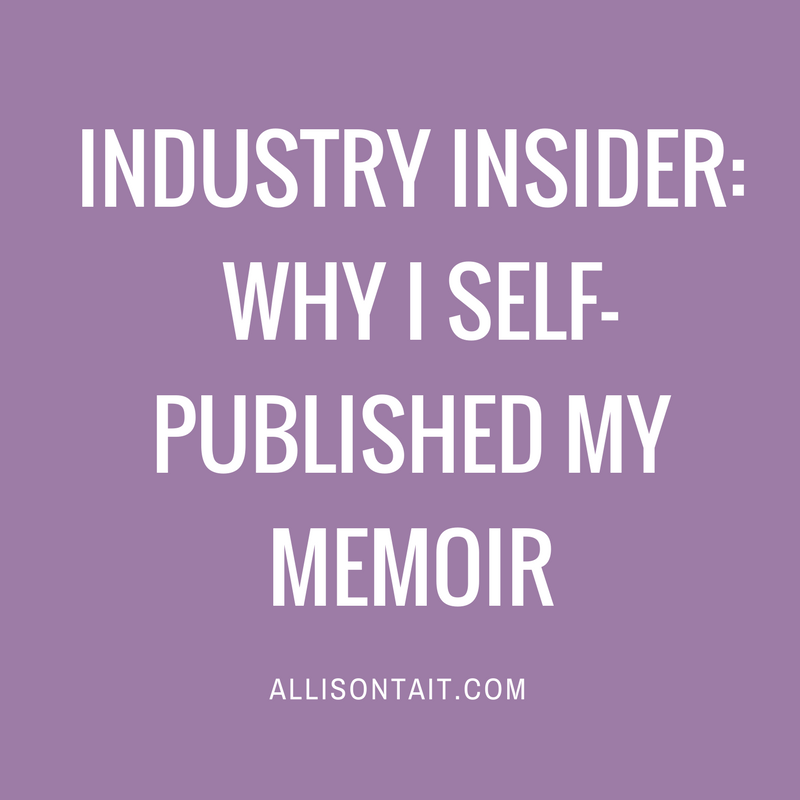 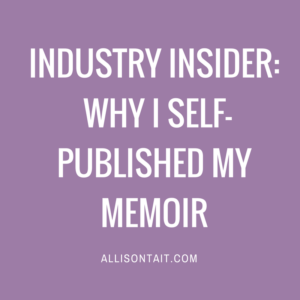 Robin Elizabeth popped up in my Twitter feed several  years ago and adds a bright spot of conversation to it nearly every day. So when I was looking for someone to talk to about self-publishing, I thought of her immediately. Her memoir, Confessions of a Mad Mooer, explores what happens when a mum keeps saying she isn’t coping but nobody will listen.

As Robin tells it: “Despite the fact that I had the seemingly perfect life with a good looking husband, a cute two year old girl and identical twin new-born boys, I fell into a deep depression. I kept telling people that I was exhausted and that I needed help but they didn’t believe me because I could still smile and laugh. I was basically told to suck it up, that exhaustion was just part of motherhood.

By the time people actually decided to help me I was ready to commit suicide and well past needing 50mg of Zoloft to bolster me up. My twins and I were immediately sent to a psychiatric hospital with a Mother and Baby unit for treating postnatal depression (PND). This treatment saved my life.”

In her brutally honest memoir, Robin shares her story, rants a little bit, and basically tries to shatter the stereotype that postnatal depression means you don’t smile or play with your baby.

“Women are often dismissed and not listened to, especially mothers,” she says. “They’re made to feel like they’re hysterical and unreasonable and I want them to know that they’re not alone, and that they matter. A lot of people think that going into a psychiatric hospital is a shameful secret that should be hidden. But for me, it helped me gain confidence, not just as a mother, but as a person in my own right. In many ways my stay in the psychiatric hospital is actually a highpoint rather than a low point.”

Today, Robin shares her self-publishing experience with us.

AT: Why did you decide to self-publish your book?

Robin Riedstra: “To be honest, I had a very specific purpose and audience for the book and I didn’t want to compromise on that. I wanted it to be appealing and accessible for mums with new-born babies. Which meant I wanted it to have a seriously beautiful cover, that tired women would see and just go “yes, that me.” So I hired Sally Walsh of Sillier than Sally Designs to give me the exact cover I wanted. Traditionally published authors warned me that the cover wouldn’t pass in a traditional publishing house because it was too “busy,” but everyone compliments the cover, so I know I definitely nailed it.

“I also didn’t want to compromise on the message. I’ve been to hell in my own brain. I know exactly what the exhaustion feels like, I know the thoughts, I know the things to look out for intimately. It’s part of who I am now. I wanted to make sure that this didn’t get sanitised to keep in with the way with some people like to portray mental illness. I didn’t want key things washed away and I didn’t want the content to become overly poetic and unintentionally glorify depression. Depression is messy, and ugly, I don’t want people romanticising it.

“Above all else I wanted it to be able to be digested by fellow exhausted mothers. So my language is conversational and pretty direct. I wanted to compete really speak to people who are suffering. I, of course, hired editors, but I still got to call the shots in the end to ensure that my core message wasn’t lost. I went for independent publishing so that I didn’t have to force my square peg into a round traditional publishing mould.”

The book is based on a series of blog posts you wrote while actually in hospital – what was the process of turning those into a book-length narrative?

RE: “I am absolutely sure that there is a more streamlined way of doing this than the way I did it, but I’ll share what I did. First off, I must admit I didn’t come up with the idea. I had slumped into another deep depression in 2015. My medication ended up needing to be changed to a higher level of anti-depressant, and I didn’t just have writers’ block, I had life block. My friends Lisa Fleetwood, author of Destination Dachshund, and Helen Petrovic, of the popular High Fantasy Addict blog, could see how badly I was struggling and that my inability to write was further exacerbating my condition. They suggested that I already had a lot of stuff written on PND in my blog so why didn’t I try turning that into a book. I was really excited by the idea because that seemed quite manageable and like something I could do in my depressive state.

“After that I just typed “postnatal depression” into the search on my blog and copied and pasted all the entries into a word document. I read them and though, “hey, I’ve said some important stuff there.” And then I thought, “Actually, I’ve got a lot more stuff I want to rant about.” And I just began writing about my experience with PND. I pretty much switched my brain off and let the words flow. After I had all the words out, I tried to order them in chronological order starting with my admittance to the hospital, cut out repetitive rants, and then added a few more.”

Given that it’s an intensely personal, irreverent memoir, did you install any checks/balances in the process?

RE: “I asked my husband to read the memoir many times, he declined, so I asked my friends Helen and Lisa, the same ones mentioned above, if they would read it and they were willing victims. I also had my psychologist take a look at an early draft to get her opinion on it.

“A lot of the women I had been in hospital with are regular followers of my blog and knew all of the old stuff already and I was careful to detail that the experience was my own and not drag them into it. That was one of the things I had in mind from the start. I wasn’t there to “out” anyone or speak for them so I deliberately hadn’t described them and I never name them.

“I also got a solicitor who specialises in creative works to take a look at it after I was finished. They said everything was fine and said I could actually name places and locations if I felt like it and put in more details from a legal standpoint, but I wanted to protect others. Right or wrong, there is still a stigma. I am happy to come out and try to smash it, and I am happy for other people to come along and smash it with me, but I am not going to drag along anyone against their will.”

You’ve produced the book both in digital and print form, whereas many indie-published books are digital only. Why did you choose to create a print version and was it difficult to organise?

RE: “I have actually been that indie author who has done digital copies only. I have a serialised commercial women’s fiction work that is in just digital format. They’re novella length and I think the subject matter and length lends itself well to digital.

“With Confessions I wanted mothers to be able to access it any way they wanted. I wanted to make it easy for them. If they want to read it in digital, great it’s ready, if they want it in paperback, it’s there for them. It’s also why I went wide with my ebook distribution. I knew it meant that I couldn’t go into Kindle Select and use all the tricks to get it onto the best seller list, but I felt that the message was more important than a tag and I wanted people to be able to get it as quickly as possible. That’s why it is available from most digital providers and on-line bookstores.

“This month I am going to start approaching bookstores. I should have done it earlier but I have social anxiety so it has taken me awhile to work up the courage. I gave myself until February to sort myself out, and February is here so it’s time I got to it. I’ll update you on how it goes.”

What was the steepest learning curve in the self-publishing process for you?

RE: “I have no idea about media releases. You’re apparently supposed to do those. I didn’t. My next book, which is coming out at the end of the year will have one… I hope it will.

“For me, thinking outside of that narrow focus of purpose and who I want to communicate with is definitely the part I am finding difficult. I am not business minded by nature so it has been quite challenging for me.Also, thinking about awards, I didn’t do that at all. I submitted it for nothing because it just didn’t even occur to me to do so.

“Great editors I know, because I have been to a million writing courses and am on twitter all the time. Cover designers I also know, so that was fine. Marketing? Forget about it, I knew nothing about it and now only know enough to know that I seriously know nothing about it.”

You’re very active on social media, you blog and you’re incredibly supportive of the Australian publishing industry as a whole – has that been a conscious step to help build an author platform?

RE: “I wish that it was and that I could give people really good business tips on how to build your author brand but, unfortunately, I’m just an impulsive sort of person. I remember the first time I heard Walter Mason, author of Destination Saigon, talk and he said, “Bring the spirit of fandom to Australian literature.” Prior to that I had always wanted to do something to support my passion, which is books, but didn’t know how to beyond buying books, which I do, but have budget constraints. As soon as he said that it was like a cartoon light-bulb went on above my head.

“You see, I’m a geek at heart, I’ve admined on some massive Doctor Who pages in the past and still admin a fairly successful “geek” group with around 10,000 members, so I know fandom. I know how to put a meme together. I know how to tweet about how much I love stuff. The notion of fandom suited me perfectly.

“I have boards on Pinterest with memes I have made of quotes by Australian authors, I even have a board dedicated to Toni Jordan’s sock collection and one of Whiskey I think Emma Viskic should drink. I started a thing on my blog called Robinpedia, which humorously catalogues Australia authors who are yet to be snapped up by Wikipedia, and I even recap The Book Club ABC. Yep, while all the cool kids are recapping The Bachelor and MKR I am sitting in my jammies, wearing toe-socks, and recapping Book Club. And the most embarrassing confession ever is, that the release date of Confessions was based around the screening of Book Club.”

Do you have three tips for anyone considering self-publishing their book?

Robin Elizabeth is an Australian writer, ranter, reviewer, dyslexic, twitter addict, and definitely a mad mumma. She blogs at Write Or Wrong about her love of Australian literature, depression, and whatever tickles her fancy bone. You’re most likely find her procrastinating away on Twitter, so feel free to say hello (and tell her that she should be writing – because she should be, she really should). You’ll find more information on her memoir here.