All he wants for Christmas… 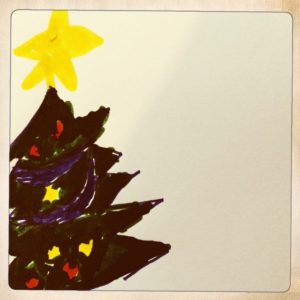 Mr6 is on a mission. He has decided that he needs an iPod. Despite House Rules stating that he must be ten to have an iPod, he will acquire one by fair means or foul.

He began his mission with me.

“Mu-u-um,” he wheedled. “Everyone else has an iPod. I should have one too.”

The next I heard about the iPod was when he was writing his Letter to Santa last week.

He was very quiet, chewing his pencil, looking off into space, writing carefully with his tongue between his teeth as he concentrated. I left him to it.

Moments later, he entered the kitchen. “Mu-u-um,” he said, faux-sheepishly. “I accidentally wrote an iPod on my Santa letter.”

Okay, well you can accidentally cross it out.

He returned to the table, striking a large, dark mark through the iPod.

Moments later, he returned. “I did it. I’ve left the letter on the table.”

The following morning, when I was putting the letter into an envelope for its journey to the North Pole, I noticed the large, dark mark through the iPod. I also noticed, in very small writing, right in the bottom corner of the letter, this:

Later, on our way to school, he asked me this: “Mum, what if Santa accidentally brings me an iPod?”

“He won’t,” I said, with enormous confidence. “Santa knows the House Rules.”

Last night, my Mum came over to look after the boys while The Builder and I flexed our intellectual muscles at a charity trivia night (we didn’t win…).

On our return, with both boys slumbering peacefully, Mum informed me, with a twinkle in her eye, that Mr6 had put the hard word on her for an iPod for his birthday. Gran had listened seriously to his proposal and then informed him that she would be talking to Mum and Dad about it.

When she told us, we laughed. What else could we do? The sheer tenacity of his approach is admirable. Misguided, but admirable.

Gran will be going back to Mr6 to discuss iPod-Gate while The Builder and I pretend we know nothing.

I await his next move with great interest.

What do your kids really want for Christmas? Are they getting it?