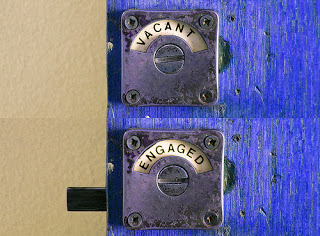 I have written before about riding on trains with boys. Several times. I seem to do a lot of it. Usually I write about the philosophical/metaphorical/[insert another ‘ical’ here] aspects of our journeys. But I think it’s time we looked at some of the practicalities.

A four-hour jouney on a train, such as we endured enjoyed today, brings with it at least one toilet stop along the way. Usually at a very busy train station, where the toilets are lined with subway tiles (well, they came from somewhere) and the stream of people in and out the door is both neverending and disconcerting.

Mr9 is, in many ways, too old to go to a female toilet. Usually, in quieter, gentler circumstances, I am okay with him taking Mr6 to the men’s toilet, while I hover anxiously outside – in the doorway – receiving strange looks from passers-by. They are under strict instructions to scream loudly if anyone so much as looks at them, and conduct their business at nano-warp speed.

Today, we got off at Town Hall station in the city, with Mr6 crab-walking up the stairs because he was busting so much, and me laden down with one large bag and two smaller ones, trying to keep track of the boys, the escalators, the crowds and the everything else. I stopped a station guard-type, in his high-vis vest (thank God for the high-vis) to ask where the toilets were. “Down the end,” he said, before adding, ominously I thought, “take them to the Ladies”.

Mr9 wasn’t happy, but there was no way I was dispatching them alone after that. So we all waited in line, then they waited with all the bags and then we finally managed to get out of there, all swearing we’d never wee again. The only bright spot was that Dyson airblade dryer thingy, which Mr6 took to with gusto.

My point (and I do have one), is that it’s bloody difficult travelling with middling-sized children of the opposite sex. Public toilets have taken on ‘dens of iniquity’ status, whether deserved or not. Accessible toilets are often the best option, but these are locked on stations and other public spaces. And there comes a time when older boys are not happy to be dragged into women’s toilets (and women are not altogether happy having them there).

When did it all become so difficult?

So I’m putting it out there. What do you do? Beyond having them cross their legs and hold on as long as they can, how do you manage this situation?