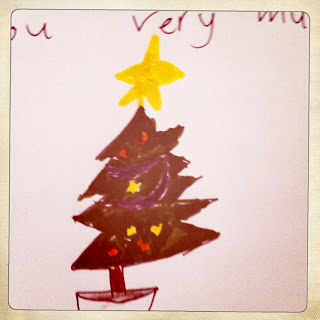 Today the boys sat down to write their letters to Santa. I’m trying to get in early this year, in an attempt to ensure that the Great Disaster of 2011, when the letters to Santa were posted so late that Santa had to send us a reply on January 14 explaining that we needed to get in earlier if we expected to hear from him before Christmas, never happens again.

Hmmmph. Santa’s minions need to type faster, is all I can say.

Anyhoo, Mr8 produced a neatly spaced, neatly thought out, neatly constructed list, complete with a Dear Santa at the top and a Thank You Very Much at the bottom. Mr5… well, we’ll get to that.

Whilst writing his letter, Mr8 let slip that there was a lot of Lego on the list.

“I really like Lego, Mum,” he said, busily colouring his Christmas tree. “I’m not sure that anyone likes Lego as much as I do.”

“In fact, there aren’t too many kids at school who want to talk about Lego with me.”

“Like history,” he said, looking up, from his Christmas star. “History is my life. And nobody knows what I’m on about.”

Dramatics aside (life?), I should explain at this point that Mr8 is one of those males who goes from obsession to obsession with lightning speed. When these obsessions take the form of Ben 10 morphing into Star Wars backflipping into Batman, all is well. When they follow the lines, as they have this year, of Ancient Greeks sliding heavily into Vikings and morphing into Nasty Knights, and, of course, Lego, things get a bit more dicey.

I choose my words with care. “You know, it’s as important to learn to talk about the things that other people are interested in as it is to share your own.”

Eye roll. “I know. But I really don’t care about One Direction or that Gangnam thing, Mum.”

“No,” I say. “Nonetheless, learning to listen to other people is a skill that will take you far in life.”

“Particularly with girls,” I throw in. “Which may not matter to you right now, but will be something you’ll thank me for later.” (I wince inwardly, knowing that I should have stopped at ‘far in life’. Edit Allison, edit.)

He froze, gave me that look that said ‘too much information, Mum’ and dropped his texta. “I’m going to play Lego now,” he said, fleeing the room.

Meanwhile, Mr5 was taking advantage of the Life Lesson taking place to put a few extra, secret things on his Santa list. I had taken great care to this point to get him to read each item out to me as he wrote it. Just for practice, you understand.

So Santa, get ready, I’m sending this in early. You’re going to need a few extra weeks to decipher it. 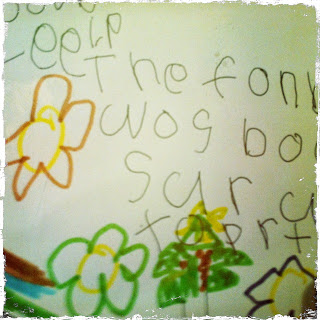 Please get back to me before January 14.

Do your kids write letters to Santa? Do you send them nice and early?