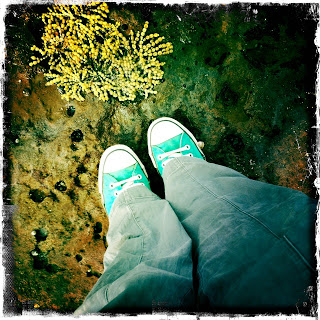 The Builder and I have decided to resurrect the Sunday drive. Remember when you were a kid and your mum and dad would throw you all in the back of the Mitsubishi Express on a perfectly fine day when you would have been quite happy to hole up in your bedroom and read a book?

You would drive in circles, looking at gardens and wharves and antique shops and all manner of other boring adult things, being told to ‘look at the scenery’ and ‘enjoy the view’ when you complained you were getting carsick or your sister/s/brother insisted on playing ‘corners’ with you when, really, who ever enjoyed that game?

When you finally got home, after hours spent listening to Neil Diamond or, gasp, Phil Collins on the tapedeck, you would all fall out of the car and your parents would swear you’d never do that again because, really, who needed to listen to kids to bicker for hours on end?

Or maybe that was just us.

Anyhoo, today we packed a picnic and drove ourselves down the coast into the endless blue of a beautiful spring sky. We told the boys we would be looking at antiques, but they were mollified by the fact that we also packed their bikes and balls of various shapes and sizes.

When we arrived at our first stop, Mr5 made it clear that for everything ‘Mum and Dad’ that occurred (eg, looking at antiques), there would need to be a Mr8/Mr5 equivalent.

When our first two purchases were a chocolate milk and a second-hand book for each of them, he thought he was on to a winner. Until I pointed out that he now had a glut of ‘Mum and Dad’ moments to overcome.

He dealt with the antiques shopping by standing out the front of the shop, on one leg, rapping about how boring life was when your Mum and Dad looked at antiques. Yo.

When I stopped laughing, I sort of had to agree. I’d have rapped the same thing had rapping been invented when I was five.

Part two of the day was pretty much wall-to-wall Mr8/Mr5 stuff – bikes, balls, beach, icecreams, rockpools, park. Seriously, I need to work harder at the ‘Mum and Dad’ stuff. Not even a wharf in the mix.

Mr5 picked up some little snails from the rockpools for his ‘shell collection’. When I pointed out that there were still residents in the shells, he was horrified.

“Is that why they were hard to pick up?” he said. “They were holding on.”

We tenderly rehoused them in another little pool, with him fussing over whether they would like their new home. I watched them burrow back into the sand.

“I think they’re much happier in there than they would have been drying out in your hand,” I told him. Perspective.

Later as we walked up the beach, I could feel the sand between my toes. Which would have been lovely and summery, bar the fact that I was wearing shoes at the time.

“I think I have holes in the bottom of my Connies,” I said to The Builder.

“What a shame,” he said. “You’ll need to buy new shoes. I bet you’re disappointed…”

New sneakers. Now there’s a ‘Mum’ thing. All I have to do now is decide on the colour.