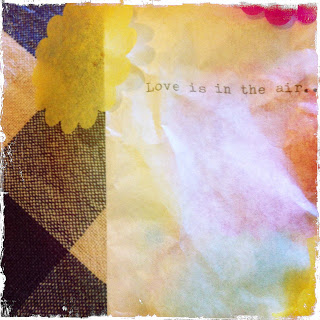 On Saturday I went to one of the loveliest weddings I’ve been to in ages. Admittedly, weddings are few and far between for me these days, with most of my friends cruising past the ‘decade’ marker and some approaching their China wedding celebrations. (China? Seriously? Not even an amethyst or something?)

So, imagine if you will, late afternoon light filtering through the trees to cast a golden glow. Garlands fluttering in the (admittedly chilly) breeze. Big fat balloons dancing on their tethers. Handmade bits of fabulousness hanging out of trees. Confetti in lolly bags. The bride in cowboy boots, the groom in spectacular sneakers.

The bride trying to keep her mascara in place. The groom choking on his vows. The best man splashing salt all over his Man In Black ensemble. The friends weeping, the family weeping, eyes welling up all over the joint.

We were all so happy, you see. The wettest wedding I’ve ever seen.

My propensity to cry at weddings, any wedding, whether I know the couple or not, is legendary. I don’t wail like Maxabella, but my eyes hurt with the blinking. Since I’ve had kids, it’s true, I cry at pretty much anything. Particularly children singing or giving speeches or generally doing anything that requires them to be earnest and innocent and young and… oh dear, I’m weeping at my keyboard just thinking about it.

It makes school assemblies quite entertaining for everyone else, let me tell you.

I wondered if the whole weeping at weddings thing was universal. So I ran a little survey on Facebook and Twitter. And,  yes, at least 80 per cent* of us are blubbering away from the moment the wedding march begins.

One Facebook friend, a photographer, admits that she cries even when she’s only at the wedding on a professional basis – to the point where one Father of the Bride had to offer her a tissue during the speeches. I love that commitment to the job!

Others were frank about saving their tears for funerals, and I get that. I cry at them, too. I guess my emotions leak out of my eyes whether happy or sad. But then, I also cry in movies. I couldn’t watch Beaches these days. Or Steel Magnolias. I was incoherent in both of them way back in my late teens. Imagine how I’d be these days, based on my school assembly performances. Doesn’t bear thinking about.

There are no weddings in my future that I can see. Sadly. I’ll have to save my wedding weeping for the television version. Though I have to admit that a TV wedding hasn’t really captured my imagination since Scott and Charlene’s big day on Neighbours. Which was a while ago. I’m not going to think about exactly how long ago.

That would really make me cry.

*please do not check my maths – I put together a guesstimate based on the comments I received. there is nothing scientific about my surveys. and it’s a well-known fact that statistics will say whatever you want them to say. ask anyone.