What did you want to be when you grew up? 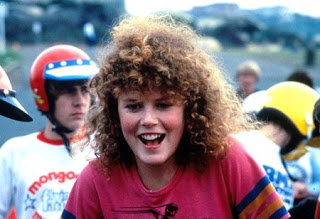 So a former student of Geelong Grammar is suing the school because they did not ‘support her’ enough in maths to get the mark she needed to do law at university. The only surprise about this is that somebody didn’t think of it before now. Seriously, I wasn’t supported enough in maths by the local high school to get a waitressing job. My general ineptitude at maths should not be brought into consideration here. Not at all. Where do I sign up for the class action?

Lots of people would like to do law at university. Lord knows why. Everyone I know who did it spent years and years working 50 million hours a week and wearing pantihose. Yes, many of them are now worth squillions… but at what cost?

Personally, I wanted to be an actress. I was ready. Starring roles in local theatre productions had prepared me for worldwide fame. And then BMX Bandits came out, and I realised that Nicole Kidman probably had the ‘frizzy-haired redhead’ roles sewn up for the foreseeable future.

I wuz robbed, I tell you.

Almost as badly as my blogging mate Kerri Sackville, whose early acting work can be seen here. Apparently she was up for Nicole’s role in BMX Bandits. She only lost by a hair, methinks.

Perhaps Kerri would like to join my class action against the producers of BMX Bandits, who clearly did not ‘support us’ enough to get us the role?

The Builder always knew he wanted to be a builder. And a builder he became. I don’t know too many people like him. For most there’s a gap between what they wanted to be when they were growing up and where they ended up as adults.

So what about you? What did you want to be when you were growing up? And where did you end up?