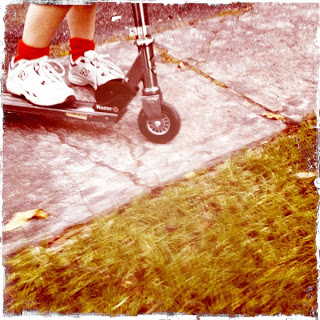 Mr5 and I enjoyed a leisurely walk home today, at the cigarette-end of the afternoon, as the sun dipped and the traffic stream swelled with workers desperate to get home. We strolled along, me on foot, him on his scooter, little legs pumping as he showed off his prowess.

Somewhere around the abandoned petrol station, where the concrete is smooth and expansive, I decided I’d have a go. He handed over the wheels reluctantly. I bent almost double to grip the handlebars, one foot taking up almost the entire deck of the scooter. You don’t realise how low to the ground kids actually are until you attempt this kind of thing…

One push and I was off.

All went well. To begin with. He ran along beside me, cheering. A second push, and I hit the footpath. A third push and I… hit a crack and almost went over the handlebars on my head.

“Mum,” he said, racing over the pat my arm. “You have to avoid the cracks. If they go up and down, they’re okay but when they go side-to-side, you can’t just ride into them like that.”

I handed back the scooter, laughing. He proceeded to lecture me, in minute detail, about the various methods of tackling cracks in the footpath. (I think he’s spent too much time with his Dad…) Apparently, one should slow down as one approaches, allowing one to dip in and out of the crack without actually colliding with the crack. Or some such.

As he settled back on the scooter and we went on our merry way, he looked up at me from under his straight blonde fringe and smiled. “It was a good try, Mum,” he said. “A bit more practice and you’ll be as good as me.”

He zoomed off. A minute later, he zoomed back, riding rings around me.

“Actually,” he said. “I think it would help if you were a bit smaller.”

*May or may not be edited for G rating