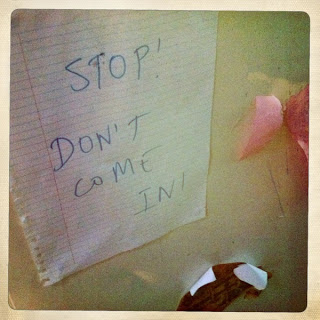 At the end of last year, when he was still Mr4, Mr5 founded the Cuddle Club. Fam Fibro were all founding members, after which he would pounce on people who visited, signing them up. Membership of the club cost one cuddle, and there were additional cuddling benefits promised throughout the year.

Fast-forward three months. Mr5 is now at school. He has posted a new sign on his door (see image). He has learnt the word ‘sexy’, though he does not know what it means. I asked him. He told me that it means ‘you’re the best’. The boy who liked to spy on birds now has two girlfriends and is talking about getting married. When he is angry, he tells me he won’t be my friend anymore. When a dog put its nose up my skirt the other day (don’t ask), he laughed and said ‘He’s trying to sniff your undies, Mum.”

In the midst of our ‘we don’t’ conversations (as in we don’t have girlfriends in kindy/use the word sexy at five/tell people we hate them/use the phrase ‘sniff your undies’), I find myself longing for Alla Hoo Hoo. Surely a woman with 98 children would have a few words of wisdom for Mr5.

I wonder if mums are allowed to have imaginary friends?