The youth hostel… but not as we know it 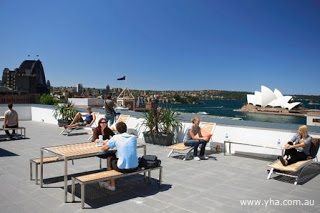 When I was in my twenties, I spent a fair bit of time in one youth hostel or another. The silk sleepsheet. The sleeping bag that never, ever rolled back into its bag. The communal everything. The telephone cards. The crowd of tanned, long-legged backpackers who always looked cooler and more street-smart than I did.

I remember eating countless permutations of Bread and Cheese. Cheese and Bread. Bread without cheese. Cheese without bread. I vaguely remember communal television rooms but don’t remember ever watching television in a hostel – really, who had time?

On Saturday night, Fam Fibro stayed at the YHA Hostel in the Big Smoke. The one with the archaeological dig in the basement and the roof garden with an extraordinary view of the lights on Sydney Harbour. The one with the cafe and the ‘internet station’. The one with, good grief, a lift!

We had a family room all to ourselves – queen-sized beds, double bunk – with linen provided and an en suite. Even a television.

My how times change.

And yet, they do not. On our way in at around 8.30pm there was a tour group in the foyer being told in no uncertain terms that if they were not ready to leave at 9am – on the dot – the bus would go without them. At reception, there was a young woman, almost in tears, insisting that she did have a booking. And the crowd was mostly tanned, long-legged backpackers, probably the children of those ones who always looked cooler and more street-smart than I did.

Oh, and that group who woke everyone up as they came to bed reaaaallly late? Yep, they’re still there too. Only this time I was on the other side, ready to wreak my revenge when my children awoke at the crack of dawn.

How long has it been since you visited a Youth Hostel? Were they a big part of your life at any stage?