The best of all possible worlds 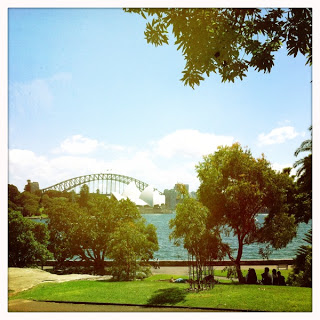 The Builder and I are a little bit Big Smoke-sick at the moment, as the reality of our treechange cements itself.

We’ve been in Fibrotown three years, and while we love it here, we have a keener sense now of the people and places that we miss than we did just after we moved.

The thrill of the new has worn off and the pall of the old is lifting. Things that drove us mad in the Big Smoke before we left have taken on the glow of nostalgia.

“Remember how we used to have to fight for a parking space?” “Ha, that was funny!”

On the weekend, we found ourselves in the Big Smoke. It really is a beautiful city. When you go as a visitor, you tend to take the best of the city and suck it dry. We took the boys to the Picasso exhibition at the Art Gallery of NSW.

With one boy each firmly in hand, we viewed 150 works by an acknowledged master. I had Mr5, so my trip through the gallery was somewhat faster than The Builder’s. I had time to take in not only the works of Picasso, but the First Aid station, the toilets (three times), the gallery shop (twice), the foyer (twice) and even an unused storeroom downstairs and the staff-only lift. You get to see a different side to a gallery when you go where the small people go.

After our gallery exploration, we found ourselves, as you do, in the Botanic Gardens. The boys ran down the paths like, well, like little boys released from the confines of an art gallery. I wandered along behind, taking note of all the people (okay, young people) lying around on the grass in various stages of undress, soaking up the (rare) sunshine, and doing not much in particular.

“Remember when you had that much time?” I asked The Builder. He agreed that he could dredge a memory like that from the dark recesses of his mind.

I remember when I first moved to the Big Smoke. Back when I was 17 and Mum and Dad installed me in a Women’s Hostel in the inner city with 51 other girls aged 17-20. We would often find ourselves in the Bot Gards on the weekends. Many of us were from the country, and it was the biggest expanse of green we could find. Right on the Harbour, surrounded by high-rise buildings, it was the best of all possible worlds. We’d spend entire days down there, lying around, doing nothing in particular, occasionally getting up to throw a ball or something. So much time.

I’m not sure I appreciated it at the the time, but one of the greatest gifts of youth (alongside beauty, optimism, lack of fear, firm skin, slim thighs and all the other good stuff) is time. Time to do nothing. Time to do everything.

But I didn’t have too much time to think about it all yesterday. We only had 11 minutes left on the parking meter and had to visit the new IKEA before we drove back to Fibrotown. In traffic.

What was that I was saying about time?

What do you think is the greatest gift of youth?