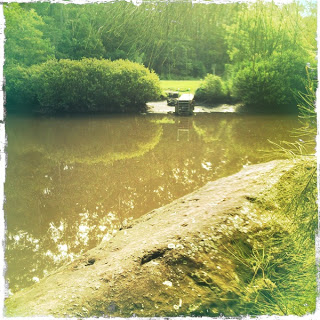 They remind me of a time in my life that was fraught with emotion – the highs and lows – and filled with the pursuit of fun. They remind me of afternoons spent playing 500 and drinking vodka and fresh lime. Scrabble championships. Sofas that were always full of Australian backpackers. A front door that was always open to friends (even at 4am).

They remind me of evenings spent in a smokey pub with a pint and a packet of crisps. Of music and comedy and films and even a rollercoaster or two. Of people who cleaned the bath three or four times a week and people who never cleaned it at all.

Of laughter. So much laughter.

“Who are we visiting?” asked the boys.

“I used to live with them in London.”

“Did you used to live in London?” asked Mr8.

It made me think about all the questions I should have asked my Mum and Dad by now. About the stuff we tell our children, and the stuff we don’t.

Later, back at home, as the sun grew weaker and a storm began to roll in, we decided that we would go for a bushwalk. One of the joys of Fibrotown is the proximity of bushwalks. There’s one right in the middle of town. I have memories of spending hours there as children, on our own. It was just up the road. Did we spend hours there, on our own, or did it just seem that way?

Going back there today was like visiting an old friend. As I followed the boys along the trail, I wondered when I would feel comfortable letting them spend hours up there on their own. I couldn’t formulate a response, even in my own head.

Has the world changed so much, or have I?