Making a meal of planning an app 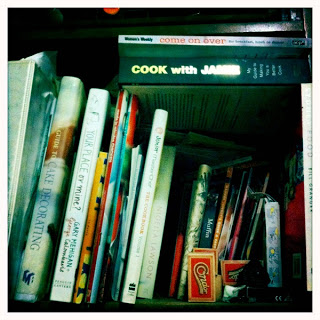 I used to love cooking. I was a huge fan of recipe magazines and cookbooks (see evidence in photo of a small portion of my collection). Always looking for something new to try.

The Builder and I used to have at least one new dish to try each week, if not more. I hated eating the same thing two weeks in a row.

All of this, of course, was pre-children. When I was dealing with two adults with relatively adventurous palates and had all the time in the world to pontificate about what we’d have for dinner that night.

So I have to plan meals. A week in advance. And generally featuring mostly things we’ve had before. Things I know that Mr8 and Mr5 will eat. Boring things.

All of which makes meal planning about as exciting as flossing one’s teeth.

Having said that, I have learned through the school of ‘Cruskits for lunchboxes’ that meal planning is essential. I do a weekly shop, including stuff for lunches, and top up with fruit and bits and pieces as the week progresses (which is to say that I’m still at the supermarket every second day but it’s only for small items). But there’s great value in arriving home after Little Ninjas or swimming or whatever and knowing the ‘fixings’ for a meal are at hand.

As I wandered through the supermarket today, menu planned, list in hand, I began to invent a new app. A meal planning app. You put in your details (number of adults, number of kids, general likes and dislikes, level of cooking skill), fighting the auto-correct all the way, and it sends you, once a week, a full week’s menus, with shopping list.

All the deciding done for you. No need to sit down and think ‘what the hell am I going to make for dinner tonight?’.

I think it would sell.

There is an app out there called ‘What’s For Dinner?’, which seems to offer access to lots of recipes, your own and other people’s. It’s almost there. Now if they could just make the decisions for you, I reckon they’d be on to a winner.

Until, of course, they create an app that actually does the cooking for you. And the washing up.

Now that would would make me app happy.

What would you put in a meal-planning app? What’s the best food/cooking app you’ve tried?