Motherhood is… Learning when to let go 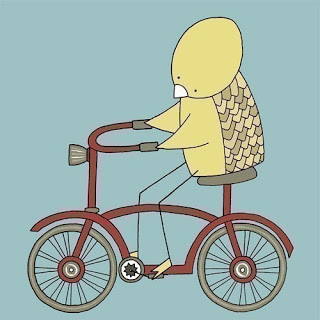 Mr4 has found the sweet spot on his bike. He is off and racing. Little legs pumping, concentration fierce. He still wobbles. He still worries. But he’s doing it. With his eyes open.

It has taken a little while for him to get going. I found him on the grass this afternoon, in tears. Mr7 told me that he’d forgotten to push off when he lifted his foot. Balancing on a stationary bike is best left to the professionals. “He went sideways, Mum,” said Mr7, solemnly.

We took them out, to a place with space and paths on which to spread his wings. He tried at first with me puffing along behind, holding the back of his seat, shouting instructions as he wibbled towards the road and wobbled towards the trees. “Let go, Mum, let go,” he screamed back.

I couldn’t. He was too wobbly, he wasn’t steering straight. All I could foresee was disaster.

On the return journey, he refused my help, turning to his Dad. Mr7 and I made our way back to the car. “Coming through!” we heard, a few metres up the track. I turned and there was Mr4 riding towards me, The Builder running behind shrieking (in a manly way) “You’re doing it! You’re doing it” (I tell you, it’s catching). He rode to the end of the path, turned and returned.

“You held on for too long,” he told me, serene in his new ability. “You have to let go. I can’t ride unless you let go.”

Oh, but this motherhood gig is hard.

[image: I love these bird prints from barkingbirdart/etsy]