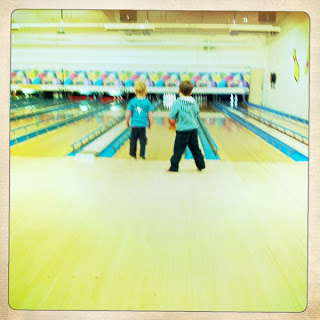 The boys and I went bowling today. In honour of Mr7’s soccer presentation, they donned two-toned shoes and slipped and slid their way across the over-polished floors to, well, dump their bowling balls down the lane.

Mr4, who’d never bowled in his life, managed a spare with his first two dribbling offerings. And then could never quite match his own success.

Once he realised that every bowl would not be greeted with shouts and cheers from the crowd, he lost interest. He did quite enjoy the enormous thump that ensued when he threw his ball, with two hands, from a great height.

In his defense, they were big balls.

Mr7 employed a cunning mix of unorthodox techniques during his games. From an attempt at an overarm throw (not repeated) to a shimmy-shake arrangement that resulted in the ball ricocheting wildly from one bumper to another to a rather spectacular effort where he appeared to forget to let go of the ball and followed it halfway down the lane on his side, his efforts were entertaining, to say the least.

I do have memories of my own first-ever attempt at bowling. We were visiting my grandparents in Far North Queensland during one of our Christmas odysseys. I’m not sure how old I was, but I had received, along with sisters B and C, a rather fetching jumpsuit arrangement for Christmas and we all insisted on wearing them bowling.

That’s it. I don’t remember how the bowling went, but I do recall being dressed in a harem-pant jumpsuit with a little tie around the neck. Which did not match the two-tone shoes.

The boys will probably not remember what they were wearing today. But Mr7 will remember the two trophies that he received for his first (and probably last) soccer season.

And Mr4 will remember that he did not receive two trophies.

In fact, any trophies at all. I know this because he repeated this fact over and over all the way home.

Are you a ten-pin bowler? What do you remember of visits to the lanes when you were young?