Book Week makes me I wish I could sew…

Reading | Writing | Your Kid's Next Read 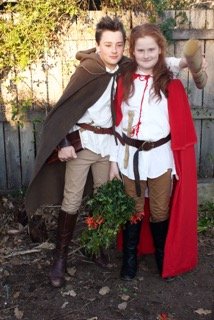 As a non-sewing, non-crafty, non-gifted-in-most-areas mother, there are certain times of the year that I dread. Book Week is one of those times. Others include Easter (Bonnet Parade, anyone?), Christmas (I can make a mean Shepherd’s head-dress out of a towel, but that’s the extent of my talents) and, indeed, any time of the year that might conjure up the need for a, gulp, costume.

Mr7’s Book Week aspirations have suffered some downgrading since he first arrived home last week declaring that he would be Robin Hood. I thought fast. If I could find some facsimile of an elfy-green shirt and a bow and arrow, we might pull it off.

Spirits were high as we hit the shops last Friday.

Spirits were low as we trudged home again.

No bow, no arrows (though he fixed this problem by making them himself from straight sticks and feathers and flinging them at his brother), specifically, and tragically, no green pointy hat.

The next morning he awoke, full of inspiration. “I won’t be Robin Hood, I’ll be Sherlock Holmes,” he said. Great, I thought, how hard can that be?

Er, hard. Apparently only a long coat will do and we have, as yet, been unable to turn up a child-sized Sherlock coat. Or a pipe, for that matter. We have a tweed cap, a magnifying glass and a notebook, however, so I feel like I’ve put some points on the board there.

As the days have drifted on and I’ve not shown enough enthusiasm for spending every afternoon unearthing the perfect costume, he has downgraded once more.

“I suppose I could go as Harry Potter,” he said, glumly. I leapt on that suggestion. We have a robe, a wand, some glasses… and there’s been so much ‘Accio this’ and ‘Leviosa that’ going on over the past year that he’s a shoe-in.

“Why so glum about that idea?” I asked.

Turns out there are at least three other boys in his class alone going as the Great Potter. I tried to bring him out of his slump by entertaining him with ideas for the collective noun for a group of Potters (see, I really am the most Fun Mum ever…).

I confess that I spent tonight googling Sherlock Holmes accessories. I have been to op shops looking for coats. I even contemplated making a boat hat out of green paper and sticking a feather on it. This is what we non-sewing, non-crafting, non-gifted-in-most-areas mums are reduced to at times like these.

I am wondering if I can put him in a black turtleneck, black trousers, black shoes and a woebegone expression and sending him as a starving writer? That would work for Book Week, right? 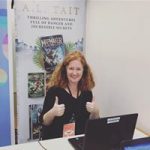