Making the switch (or thinking with your eyes open) 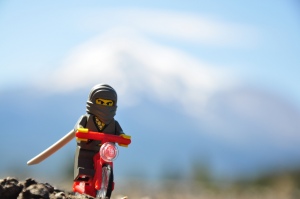 Following Thursday’s Inner Hoon post, Mr4 (who, by the way, did not read that particular post) decided that today was the day to Lose The Training Wheels. He was ready to be a Big Boy. Fo’ Real. So, with great ceremony, the little wheels were removed and he and I and Mr7 duly removed ourselves to the wide, open spaces of the local showground to see if we could, as Mr7 put it, get him going.

Half an hour into proceedings, huffing and puffing and with very sore hamstrings from bending over to hold the back of his seat (which is not very far off the ground), I called a halt. He had made some progress. He could push off and pedal a few rounds, but then it all went pear shaped. Let’s just say that any distraction is a good distraction as far as Mr4 is concerned. And every time he spotted a distraction, his handle bars went left and he went with them.

As I carried his bike back to the car, I told him that he needed to concentrate a little better. Looking at motorbikes roaring past, for instance, was causing him to crash.

“But I was looking at the lovely day,” he responded.

I know the day is lovely, but even so. If he wanted to ride his bike, he needed to think a little harder.

“But when I think really hard, I have to close my eyes, Mum,” he responded. Er, yes, I could see how this would make staying on the bike difficult. (See Thursday’s post about raising the legal driving age to 30.)

I told him that he needed to find a way to think hard with his eyes open.

Later, as we were driving out to view an antique food safe (I take them to all the best places, it’s true), he told me that he’d had a breakthrough. “I’ve worked out how to think with my eyes open,” he told me, pride infusing every syllable.

“There’s a switch in my head,” he confided. “If you push it one way, your eyes close. But if I push it back the other way, reeeeaaaallly hard, I can think with my eyes open.”

Oh, that’s all right then.

We are heading back to the showground tomorrow for round two. Let’s hope that switch is in the right position.

Have you taught a child to ride a bike? Any tips for one who is distracted by ‘the lovely day’?