Life’s a beach, even in winter 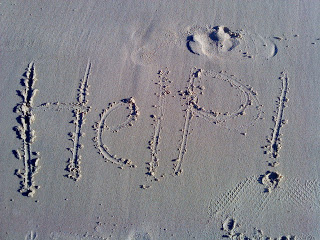 After weeks of rain, Fam Fibro escaped to the beach yesterday. I love winter at the beach. When the sky is blue and the air is crisp, there’s no better place to be. No pressure to strip off and get wet. Just the opportunity to be.
We ate fish and chips with our feet dangling off the boardwalk. “I”m just going to go and run around a bit,” said Mr7, licking the last of the salt from his fingers. And he did. Literally, run around in circles, over and over.
We walked along the beach, right out to where the waves have pounded the rocks flat, cascading over them as though running down stairs. From a distance, it looks like a still, shining rockpool. It’s only when you get close that you can see the water is just centimetres deep, dressing the rocks like a sheet of salty icing.
Mr4 runs ahead, hovering closer and closer to the water, itching to get wet despite the brisk breeze. Mr7 stops at intervals to write ‘help!’ in the sand. Should I be worried?
Along the way, we talk about the whales we saw last time we came to this beach. Far out to sea, languidly migrating, breaching occasionally to let us know they were there. Mr4 and The Builder talk about a book they have been reading about whales.
“Do you remember what it’s called when they come up out of the water?” asks The Builder.
The air is heavy with expectation. Mr4 feels it. He wants to get it right. His nose wrinkles and his brow crinkles as the wheels turn round in his mind.
“Um…” he says.
“Do you remember?” The Builder prompts.
“Er… Fish Hopping?” Mr4 responds, half triumphant, half questioning.
I am still dissolving into random giggles at that answer, even 24 hours later.
[image: The Builder]