Left on the shelf 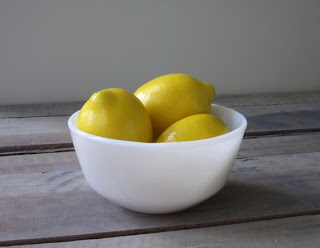 In my kitchen, there is a shelf. I have seen such shelves in other people’s kitchens, usually photographed in glossy interiors magazines. In those pictures, such shelves are clean, horizontal spaces, used to denote the transition from one section of an open-plan space to another, without the need for anything so unsightly as walls. In those pictures, such shelves are adorned with one witty fruit bowl, often overflowing with piles of unseasonal lemons or limes (see left).

In my kitchen, there is a shelf. I know it’s there because I’ve seen it. When we moved in. Since that time, it has been buried under an avalanche of family detritus. Or ‘an eclectic layer of adornment’ if you like the interiors-speak better. Pencils and textas (but never a working pen when you need one). A thermometer to poke in sick children’s ears. Keys. A Tupperware catalogue that I forgot to order from. Two DVDs that I forgot to return to the shop. Those children’s artworks that are not destined to be treasured forever but must spend their time at the holding station before being recycled lest said children think that we do not love them. Three funky orange canisters that have never held anything. A shiny copper jam pan with a witty fruit bowl stuck inside it because there is not room on the shelf for both. Admittedly, there are some lemons in said fruit bowl – but they are withered and stale because I forgot to use them. It’s hard to see them under all that adornment.

Every once in a while, I clear off this shelf, leaving it bare but for the funky canisters and the weird jam pan arrangement. Within minutes, it has started attracting a new layer of adornment.

In your kitchen, is there such a shelf?