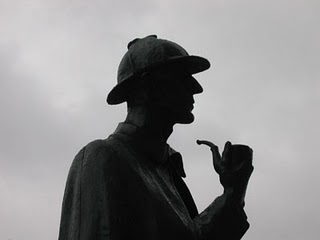 Mr7 has a new love. Gone are the days of wands and wizards and Accio Teddy Bear! Harry Potter has been put back on the shelf, ready to be resurrected when Mr7 is old enough to tackle the grumpy Harry of books 4-7. Instead, he has pulled on a Hawker hat and dragged the magnifying glass out of his old Explorer’s kit.

It all began with The Baker Street Boys. I have been desperately seeking out a new series of books to capture his attention and wean him off Harry, Ron, Hermione et al. It has required that I read a whole selection of children’s books myself (which has been quite an education in itself) looking for titles that are challenging and yet age-appropriate.

After some consultation with J, the lovely children’s librarian at the Fibrotown library, I came home with The Ranger’s Apprentice (which I loved, but Mr7 did not), Emily Rodda’s Key to Rondo (jury still out), something about The Magnificent 12 (nobody was too keen), the first book in The 39 Clues (looked good but Mr7 found scary) and The Case of The Ranjipur Ruby, one of Anthony Read’s Baker Street Boys series. Once he got his head around the old-fashioned setting and some of the language, he was hooked. To the point where he immediately began searching out Sherlock Holmes stories.

Once again the Fibrotown library provided – abridged versions of Holmes classics. Is there nothing you cannot find at a public library?

It’s not his first foray into the joys of mystery novels. The Famous Five and The Secret Seven are old friends, as is Encylopedia Brown. But, as any grown-up fan knows, Holmes is the original and the best. I asked Mr7 why he liked him so much. “I like the mysteries – and he’s really, really smart, Mum.” What’s not to love?

And so we sat together tonight and began reading A Study in Scarlet, the first Holmes story ever published, brought home today in the illustrated version from the school library. Being an old Holmes hand by now, Mr7 was thrilled at the references in the introduction to the Baker Street Boys, The Red-headed League and other classic Holmes stories. He’s putting the pieces of the puzzle together.

I confess that I was worried that the central tenet of the opening chapter is a dead body lying in a room. But he was unperturbed by this. “It’s just a story, Mum,” he said. Indeed, the setting, the old-fashioned politeness, the language and his own sheer lack of worldliness make such stories seem less real to him than Star Wars or Harry Potter. Despite this, The Builder and I have decided that A Study in Scarlet is not age-appropriate and have put it on the shelf marked ‘later’, alongside Harry Potter  – it seems that I’ll be speed-reading my way through several Holmes stories in the near future looking for those that are not too dark and dire (all suggestions gratefully received).

I can understand why he likes them. A classic story is a classic story, no matter what your age or time zone. And, as any fan of mystery or crime novels will tell you, the joy is not just in solving the puzzle, but in the triumph of good over evil at the end.

What are your kids enjoying reading at the moment?