Could you self-publish your book? 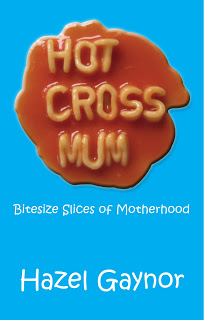 My monthly writers’ Q&A is an endless source of fascination for me. So many writers, so many questions, so little time. This week: self-publishing your novel.

My guest this week is Hazel Gaynor. I first discovered Hazel when I was in my infancy as a blogger, criss-crossing the internet in search of blogs I could relate to.

I found Hazel’s Hot Cross Mum relatively quickly and was soon a regular reader. She was straight to the point, and funny, and she’d somehow managed to spell out her blog name in spaghetti to create her header. What’s not to like?

Now Hazel has launched her first book – a self-published e-book called Hot Cross Mum: Bitesize Slices of Motherhood (featuring that world-famous spaghetti), which charts the first 12 months of her journey from leaving a corporate career to adjusting to life as a SAHM to two children. The story of how it came to be is an interesting one, and one that I just knew the friends of Fibro would want to hear. So here it is.

Why did you decide to self-publish your book?
HG: “Two years ago, I didn’t know what an e-book was, or a blog for that matter! I started my blog as a platform for developing a writing career after I was made redundant, just at the point when ‘mummy blogging’ was exploding in the UK and Ireland. The phenomenon of blogging and my part in that attracted the interest of Irish press and TV, and the blog was noticed by a literary agent. She enquired whether I’d considered developing a book based on the blog. I hadn’t – but I started work on it the very next day!

“When it was submitted, the book received interest from publishers in Ireland and the UK, but unfortunately didn’t make the final hurdle. I was obviously very disappointed, but dusted myself off and continued to write the blog for my personal pleasure and turned my hand to fiction writing and my freelance career.

“The book has sat on my PC ever since, nagging at me! As e-books became more and more popular, I started to think about putting ‘Hot Cross Mum: bitesize slices of motherhood’ out in that format. A friend of mine, Catherine Howard, was starting to see phenomenal success with her e-book ‘MouseTrapped’, and encouraged me to go for it!”

What was the process?
HG: “Initially, I planned to do everything myself; sourcing a cover designer, formatting the book for the various e-book distribution channels and managing all the uploading. Other writers who have gone down the e-book route have done everything themselves and it has worked for them. But with two young children to look after and a part-time freelance writing job to hold down, I just simply didn’t have the time – or probably the technical capacity if I’m honest – to do this. Having finally decided to do the ebook at the start of 2011, I just wanted to get on with it.

“So, I decided to use the expertise of a self-publishing company, Original Writing. They created the cover (using my carefully crafted spaghetti letters image!), formatted the text and have managed all the technical aspects of uploading etc. It still took a lot longer, and more work, than I’d anticipated – to get the cover looking right and to proof the formatted PDF for errors, pagination etc. But it certainly got the job done and I can guarantee the book would be floundering somewhere in cyberspace without that external input.”


What has been the most daunting part of the process?
HG: “I think the most daunting part of the process is just about to happen. Having put so much time and energy into writing the book, I feel extremely protective of it. Also, this isn’t fiction. This is real, honest stuff about my life and my family – I think that makes it all the more important to me. Now it is out there and available for public consumption I just hope that it is well received. I guess that’s the leap of faith any writer takes when their carefully crafted words are let loose on the general public!”


What are you doing to promote the book – has that been a difficult task?
HG: “Promoting a book is hugely important – especially for an unpublished author who is self-publishing. Fortunately, through my blog and social media such as Twitter, I am connected into a great network of other bloggers and writers. A number of people who have seen a preview of the book are kindly doing reviews and guest posts on their sites.

“I also approached some successful, international established authors , and parenting magazine and website editors who have given me some lovely review comments to include with my promotional material. Having their endorsement was really important to me. Plus, I’m working closely with Irish-based site http://www.directebooks.com/ to generate a publicity campaign for the book. This will include the book being featured on their blog and being promoted as their recommended read. I will also running a competition, sponsored by directebooks, to win a Sony e-Reader and credit for their e-bookstore.”


I assume you’ve researched the ebook world extensively – what do you think are the keys to
creating a successful e-book?
HG: “I think that the key to creating a successful e-book is probably the same as creating a successful book in any format: it has to be the writing which ultimately engages the reader and wants them to keep turning the page – or sliding their finger across the screen in this case! From seeing other writer’s experience of publishing an ebook, it seems to take a period of about 12 months for the word to get out there, for reviews to start coming in and for the sales to really start to increase. I am at the very start of my e-book journey. It’s a daunting but exciting prospect ; who knows where I might be in 12 months’ time. As they say, watch this space!”

Check out Hazel’s book on Amazon and go say hello at her blog here.


So, what do you think? Could you do it yourself?