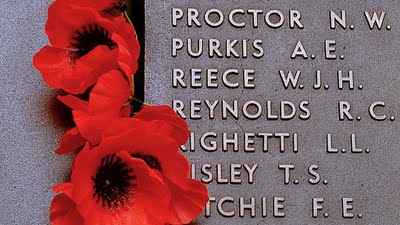 I was sitting here, preparing to write a post about ANZAC Day. Day of remembering. We watched the parade at Mum and Dad’s house, kids waving flags from the driveway. Then I remembered that it was pretty much a carbon copy of last year, so I scrolled back to read what I’d written. You know what? I really liked it. It says everything I want to say. So I’m saying it again.
Today was ANZAC Day. Day of Remembrance. Day of marching. Day of The Last Post.
The Last Post is one of the saddest pieces of music ever written. It brings tears to my eyes every time I hear it. Particularly when played inexpertly at school assemblies. There is something about the random squeaks and blasts produced by a teenage bugler that conjures up for me the endless baby faces of young soldiers.
The bugle at Mr6’s school ANZAC Day service last Thursday (Friday was a dreaded Pupil-Free Day so we had to get in early) was played by a young man from the local high school. He had the windswept supermodel hair that defines his generation, an earnest expression and a bit of difficulty with the high notes. He reduced me to blinking back tears.
Beside me, on the asphalt, behind the colony of school hats carefully paying attention under the principal’s nose, was an elderly gentleman. Someone’s Grandfather. Who stood to attention through the entire service. Stiff, upright, proud.
He reduced me to tears proper.
Today we took the boys and some friends visiting from The Big Smoke over to my mum’s house to watch the march. Every parade of any description for the past 30 years has stomped past my parents’ house. Our friend C remarked that she’d never actually been to an ANZAC Day parade that went past someone’s house before. In the city, it requires two train changes and a packed lunch to attend the march. Here, we munched on homemade ANZAC biscuits in the driveway and waved to the veterans as they went past – many of them in taxis.
One of the reasons that I love ANZAC Day is those beaming faces in those taxis. It’s the one day of the year when our oldest citizens feel all the warmth our community can bestow. When we remember that they were young once. I know that the Day is about remembering fallen soldiers, but I love that it’s also about remembering (and acknowledging) the ones that survived.
Afterwards, we retired to the Fibro for a barbecue. We had a few drinks, ate some sausages, shared some stories and lots of laughs. The children rampaged around the garden like Wild Things. After a few wines, I found myself wondering if perhaps we shouldn’t be a little more… reverent.
But then I thought, no. What were all those young men fighting for if not for their children and their children’s children to enjoy the freedom of an afternoon just like the one we enjoyed today.
Lest we forget.
This year, there were fewer smiling faces waving from taxis. There were, however, many more school children marching (well, approximating marching) up the street. Solemn little faces doing their best to honour the memories of our Diggers. Right before they reverted to Wild Things.
[image: Radio Australia]