Now we are four 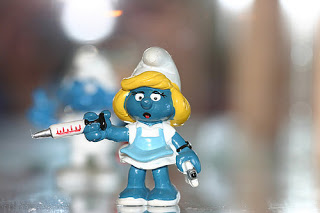 When I told Mr4 this morning that he would be seeing a doctor today he asked why.

“I’m not sick Mummy,” he said. “I’m on holidays.” Any day that is not a preschool day is a holiday as far as he’s concerned.

I went on to explain that he had to go and have his four-year-old needles. He wanted to know what a needle was. Given how much he screamed last time he had one, I was sure he’d remember. Clearly the two-year-old brain blanks out the pain of the immunisation process. Much as the maternal brain does with labour.

Mr7 was keen to elaborate. “They poke medicine in you,” he said. “It hurts a bit.”

Mr4 thought about that.

“I thought you went to the doctor to make you feel better,” he said. “Not to get hurt.”

Much discussion ensued about what kind of pain it was, how much pain there was, did we really need to do it?

And so we did. Via a milkshake, and with the promise of a surprise if he was brave. And he sat up straight on my lap and didn’t even blink as two nurses approached from either side and jabbed him simultaneously. “That was all right,” he said, as he climbed down. “Now, where’s the surprise you promised me?”