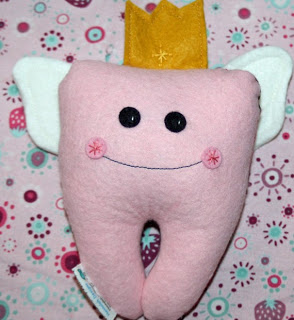 I’m going to have to have a chat with the Tooth Fairy. Who didn’t come last night. Again. She will now be known in this house as Tardy Fairy.

As I explained to Mr6 this morning, it’s not that she forgot him. Oh no. It’s just that our last name is towards the end of the alphabet. Maybe she just didn’t get to him yet.

He thought about that for a moment. “But what about Santa? He does the WHOLE WORLD in one night.”

“Yes,” said I. “But he has eight reindeers and a few elves to help. The Tooth Fairy is small. She has only herself. She probably gets tired. And lost – there may be GPS on a sleigh, but not on her wings.”

He thought about that for a moment. “You’re probably right. She took a few days to get here last time as well.”

I was relating this tale to my Mum and Dad a few hours later. They laughed. “It always took her at least four or five days to get to our house.” Funny, I don’t remember that. Probably because it was TICH who bore the brunt of Tooth Fairy fatigue.

Anyhoo, I put in a call to the Tardy Fairy. She assures me she’ll be there tonight, unless there’s a problem with the air currents. We also had a little chat about rates. When she began her tenure at the Fibro, she started out with 20c. Then, a change in Tooth Fairy personnel took the rates up to $2 for the next tooth. Talk about inflation. But we’ve agreed that $1 a tooth is a fair rate, though she did niggle a little over conditions. She’s not happy with the espresso cup in which Mr6 leaves his tooth. She’d prefer a tooth fairy pillow (such as the one pictured by Hannalah on etsy.com). I didn’t think I’d cope with having to find the pillow, let alone remember to use it.

I asked Mr6 how many more teeth he thought he had to lose. “Hopefully lots Mum,” he answered, cheerfully. “I’m saving for a Lego Death Star.” Given they’re about $300, he’ll need to start stealing other people’s teeth to afford it purely on ill-gotten Fairy gains.

Either that, or he’s in secret negotiations himself with the Tardy Fairy and I can expect a strike for higher rates any tooth now.

Is the Tooth Fairy on time at your place? What’s the going rate?